"Patty Hype"
"Wormy" is a SpongeBob SquarePants episode from season 2. In this episode, Patrick and SpongeBob take care of Sandy's pet caterpillar Wormy while she's away, but when it turns into a butterfly overnight, they think it's a monster who ate Wormy.

As the episode commences, SpongeBob and Patrick are given the task of pet-sitting Sandy's pets while she is out of town. One of the many animals left in their care is a small Monarch caterpillar named Wormy. Despite it requiring the least attention, SpongeBob and Patrick quickly befriend the caterpillar and enjoy a day of play together. As the two leave, they vow to have even more fun with Wormy the next day.

Overnight, Wormy undergoes a quick metamorphosis and becomes a monarch butterfly. When they return the following morning, SpongeBob and Patrick search for their new friend, but merely see what looks like a beautiful winged creature instead. Upon opening the jar and finding only Wormy's discarded chrysalis and best friend ribbon inside, they come to the grim conclusion that this "horrific beast" has devoured Wormy and is now on the loose. They try to trap the supposed monster by disguising Patrick as bait. When this fails, SpongeBob manages to encase the butterfly in a bubble and releases it outside the treedome, in attempt to "save" Sandy's pets. However, now the butterfly is loose in Bikini Bottom, so SpongeBob and Patrick chase after it.

Beating the creature to the Krusty Krab, SpongeBob interrupts Squidward's photoshoot of Mr. Krabs with the first dollar he owned since the Krusty Krab opened, so he could warn Mr. Krabs and Squidward, both of whom scoff at the tiny insect. However, with one good look at its face, the two are scared senseless and run away, their discarded undergarments leaving SpongeBob and Patrick to believe they were also eaten.

SpongeBob and Patrick begin to spread news of the "terrible monster" throughout Bikini Bottom. Mass chaos erupts with every tiny flap of its wings, and as a result of the people's hysteria, the whole town ends up destroyed in a fire.

A few days later, Sandy arrives back at the ravaged town, saying that it looks like a twister hit it and wonders where everyone is. Wormy then flies up to her and she recognizes him, saying that he was not supposed to change until her return, and places him inside a jar. As the episode concludes with all the townsfolk cheering and celebrating the capture of the so-called monster, Sandy believes it to be just because they missed her that much, and thinks maybe she should go out of town more often. 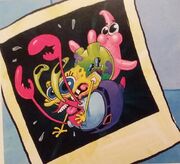