"New Leaf"
"Wishing You Well" is a SpongeBob SquarePants episode from season four. In this episode, Mr. Krabs opens a wishing well. 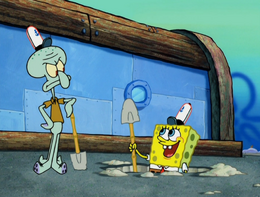 Squidward wishes to get as far away from the well as possible, and is subsequently hit by and stuck to the front of a bus going to "far away". Mr. Krabs asks SpongeBob how much money they made, and SpongeBob explains that they made no money, but found the magic. Mr. Krabs then tries to explain to him that there is no such thing as magic, but then sees that the wishes of Sandy, Mrs. Puff, and Plankton have all come true. SpongeBob asks if the sights were proof enough but the skeptical Mr. Krabs still refuses to believe in magic, and tries to prove that it does not exist by wishing to be "steamed and served with a side of melted butter." SpongeBob becomes worried for his boss before Mr. Krabs gloats and asks where his magic is before he suddenly disappears.

Retrieved from "https://spongebob.fandom.com/wiki/Wishing_You_Well?oldid=3345746"
Community content is available under CC-BY-SA unless otherwise noted.