SpongeBob introduces the Bikini Bottomites the bubble animals. Squidward wakes up, wears his gardening uniform, goes outside, and being eaten by a bubble sea monster. SpongeBob tickles the bubble sea monster, which lays Squidward as an egg until a bubble goat ate his gardening uniform, begins to scream, starts running, popping out of there cells, and being hanged from a bubble rhinoceros. The bubble rhinoceros begins to run and pops the whole entire bubble zoo, and the other bubble animals begins to run away which runs over SpongeBob. Patrick tries to stop them by using the bubble elephant's trunk to make as a hammer. He starts whacking the animals until the bubble elephant whacks Patrick.

The bubble animals went wild. Mr. Krabs is protecting his cash register and Plankton and Karen are surrounded by bubble penguins. While SpongeBob and Patrick are surrounded by the bubble animals which makes Patrick hides in SpongeBob's body and SpongeBob begins to yell which makes the animals free from the zoo to save him. The zoo manager tries to stop the zoo animals but they run over him. 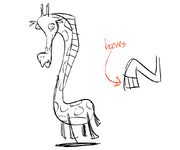