"Patrick! The Game"
"What's Eating Patrick?" is a SpongeBob SquarePants episode from Season 9. In this episode, Patrick enters a Krabby Patty eating competition in order to defend Bikini Bottom's honor.

The episode begins at the Krusty Krab, where the Krusty Crew is celebrating the annual Krabby Patty eating contest. Squidward tells SpongeBob that Mr. Krabs only cares about the profits as SpongeBob disbelieves that explanation, but Mr. Krabs quickly confirms to SpongeBob that Squidward's reason as to why he is so overjoyed is correct. Mr. Krabs explains that this is the time of the year where he gets the most money due to him being the supplier of the Krabby Patties. An unbeatable challenger named Oswald McNulty has won every Krabby Patty eating contest, and beaten every single city champion except Bikini Bottom. Mr. Krabs gets excited before Squidward tells him he only has to sell one patty as the latter questions the meaning of this.

Squidward berates his boss for not reading the paper and shows it to him to and reveal only one patty is needed. Mr. Krabs is devastated by the news, as he believes he is not going to get any revenue until he sees Patrick, who comes in to order 47 Krabby Patties as a light lunch while stupidly mistaking a broom for Squidward. Taking advantage of Patrick's naïve nature, Mr. Krabs then proposes that Patrick becomes the next Krabby Patty eating champion, and Patrick agrees. After Patrick takes too long eating, Mr. Krabs sees how McNulty eats the patty by not chewing. He then begins Patrick's training by making him eat Krabby Patties without tasting them, to his sadness and SpongeBob's worry. While training, he sees a young boy with a broken foot with his father. The father's son asks Patrick a question, and Patrick tries to answer, but Mr. Krabs tells the crowd to see him at the Krusty Krab.

The contest is about to start, the crowd is outside of the Krusty Krab and two guards carry Oswald, who is sitting on a chair being lifted by the guards, then the crowd starts booing, including the boy with the broken foot and his father.

The contest is shortly going to start, and when SpongeBob asks the competitors if they are ready, Patrick says he does not want to do it. SpongeBob says, "Well then don't do it, I'm sure Mr. Krabs will understand.", but Mr. Krabs hears this. He then gives Patrick a bill, listing the Krabby patties Patrick ate for training. He says that they have just become plain eating patties, and Mr. Krabs says if he does the contest he will not have to pay the bill, then Mr. Krabs points to the crowd cheering for Patrick and the boy with a broken foot is in the crowd, so Patrick says that he will do it for him. Then Mr. Krabs tears up the bill.

The contest begins, and Oswald is eating the patties already, but Patrick is struggling and is barely eating any of the patties. Patrick looks at the crowd, seeing the boy with the broken foot cheering Patrick on. Patrick becomes encouraged by that, and then eats a whole entire plate of patties. Oswald starts eating faster, both of them start eating faster, all until they are tied at 999 patties eaten with one minute left until the contest ends, but both stop. Oswald falls from his chair. Patrick tells SpongeBob he cannot continue, but SpongeBob reminds Patrick of the taste, then Patrick gets encouraged to eat one last Krabby Patty to win. Patrick then points to the boy with a broken foot, and the boy gives Patrick the last patty. Patrick eats the patty before the minute is up, then wins the contest.

Patrick is handed the belt, and puts it on. Perch Perkins asks Patrick if he is going to enter the contest again next year, but Patrick says no, and says the belt does not even fit. The belt flies out when Patrick puts it on, then it hits the boy with the broken foot off-screen and breaks his other foot, as the episode ends.

On May 29, 2015, Sherm Cohen released two storyboard images from this episode. It should be noted that at the time of their release, it was unknown which episode they belonged to.[2][3]

Rough storyboards for this episode

Backgrounds for this episode

Vincent Waller confirmed the episode on Twitter on September 2, 2015.[4]

On October 2, 2015, Adam Paloian released a storyboard image from this episode.[5] 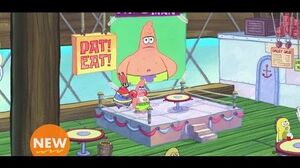 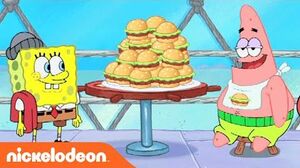 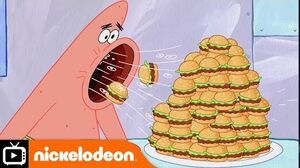