Whale of a Birthday

"Karate Island"
"Whale of a Birthday" is a SpongeBob SquarePants episode from season 4. In this episode, Mr. Krabs sends SpongeBob to get Pearl a birthday present.

Pearl has had fifteen horrible birthday parties due to the frugal ways of her father Mr. Krabs, and her sixteenth birthday is just one day away. Mr. Krabs is forced to promise that he will not be cheap and will give her the best birthday ever, or else Pearl's high school reputation will collapse and he will have to "support Pearl for the rest of her life." Pearl gives him a long list of everything she wants at the party. While Mr. Krabs works on the party, SpongeBob is assigned the task of figuring out what Pearl would like for a birthday present. Mr. Krabs hands SpongeBob his credit card, so that if something Pearl wants should be bought, it can be bought with the credit card. While SpongeBob trails Pearl and her friends through the Bikini Bottom Mall, he uses the credit card to buy practically everything Pearl even mentions having an interest an owning.

Once Pearl arrives at her birthday party with her friends, everyone is horrified to find that her dad broke his promise and his miserly ways have won out once again. The popcorn is stale, the drinks are dishwater, Pearl's "ice" sculpture is made out of four-hundred pounds of raw Krabby Patties, the cake is made out of cardboard and frosting. To make matters worse, instead of Pearl's favorite boy band, Boys Who Cry, Squidward performs a cover of their song "Four-Ply." Pearl is also extremely hurt that her father could not stop being cheap even for her. Mr. Krabs feels bad and tells Pearl that he will try to make it up to her, somehow.

Just then, a delivery truck arrives with all of the items that SpongeBob bought for her, including the Boys Who Cry. SpongeBob hands Mr. Krabs the bill, which is excessively large. Before he can do anything about it, Pearl thanks her father for making it up to her, although SpongeBob is still in hot water with his boss. 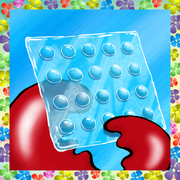