Encyclopedia SpongeBobia
Register
Don't have an account?
Sign In
Advertisement
in: Characters, Characters with one appearance, Male characters,
and 13 more

The Wee Yellow Bot is a boss who appears as an enemy in the video game SpongeBob's Truth or Square.

It is a light gray robot with red and gray hands and has a light yellow face with some blue on the top of its head. It also has red and white eyes.

It is the main boss the player has to defeat in Level 2: Meeting Sandy Cheeks. 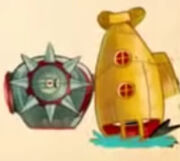