In the beginning of the short, SpongeBob shows his new watch to Patrick and thus, asks him if he likes it, but his usual response is no. SpongeBob strips down his watch from his left arm, and wears it on the right one, making Patrick's mindset to change, and like it, as the short ends. 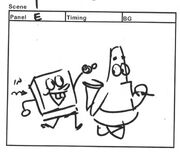