This is the page about the season 8 episode. For other uses, see Plankton (disambiguation).

"Mooncation"
"Walking the Plankton" is a SpongeBob SquarePants episode from Season 8. In this episode, SpongeBob and Mr. Krabs win a free cruise, while Plankton tries to take the formula again.

The episode starts with Mr. Krabs and SpongeBob's friends at SpongeBob's house, where Plankton stands in front of a film projector, calling himself "The Great Genie of the Slide Carousel." He says he will make them watch his slideshow, but in the process, one of the slides presses against him and the light, later burning him, then he starts screaming, and destroying the projector. SpongeBob saves the show when he inserts the light in himself and holds the slides up. Then, the show begins.

At the Krusty Krab, the mailman arrives with a letter, and SpongeBob runs out to greet him. The mailman grumbles, "Boy, if I weren't already on parole," and walks off. SpongeBob takes the letter to Mr. Krabs and opens it. Inside are free tickets for a cruise for Mr. Krabs and one guest. Mr. Krabs tells SpongeBob he can come along if he agrees to be his manservant, and SpongeBob accepts. The tickets were part of Plankton's plot to once again steal the Krabby Patty secret formula, and he is seen watching Mr. Krabs and SpongeBob preparing for the vacation from his telescope. However, when Mr. Krabs says he'll take the recipe with him as a precaution against "a certain one-eyed creepy crawly," Plankton uses Plan B: go on the cruise with them. He tells Karen they're going on a cruise, and she's initially excited until she's struck with the realization that this is part of his plan to steal the Krabby Patty formula. He lies to her and tells her it's their second honeymoon (to which Karen angrily replies they've never even had a first one). Plankton sets the dial on her vacation dial-up, making her giddy. Plankton prepares his suitcase, but Karen, in her excitement, uses the death laser to slice it half. Plankton sets the vacation dial lower. While on the cruise, Karen enjoys herself as she and Plankton lie on lounge chairs.

As he puts sunscreen on her monitor (to prevent "screenburn"), Plankton catches sight of SpongeBob pushing Mr. Krabs around in a wheelchair. He mutters his plans, but Karen asks, "Who are you denouncing now?" Plankton lies and says the server is late with the hors d'oeuvres. When the server arrives, Plankton takes one of the crackers and gets kelp cheese on his head. Karen, still in a giddy mood, laughs and tells him that the snack is as large as he is. This gives Plankton an idea. Knowing he'll be in trouble if he tries to steal the Krabby Patty in front of Karen, he sculpts the cheese into his likeness and sneaks off. After being crushed underneath the wheelchair, he returns to his lounge chair, where Karen wakes up from sleep mode. When he sees them again, he massages her wheels, causing her to fall asleep again. Then, he follows Mr. Krabs and SpongeBob into the steam room, hiding in a bucket of water. However, a large and sweaty fish named Bubble Bust comes along, gets a ladleful of water (and Plankton), and pours it onto his back. Plankton screams as he slides down Bubble Bust's back and into his speedo. When SpongeBob and Mr. Krabs are playing shuffleboard, Plankton hides under a puck but is soon flung away when Mr. Krabs hits the puck he was hiding under. When Mr. Krabs is on water skis, Plankton attempts to cut the rope that keeps him attached to the cruise ship, but he falls overboard and into the ship's propellers which slice him up. Plankton climbs back on board, lifting his severed lower half up after him, and gives up stealing the recipe.

Mr. Krabs and SpongeBob go to the free land food buffet. Mr. Krabs bites into corn (biting off the cob), then spits it out, into SpongeBob's mouth. Disgusted by how the food tastes (saying it tastes like "putrefied coral stems dipped in rotten butter sauce"), he has SpongeBob cook him some Krabby Patties. The passengers, attracted by the smell, line up, giving Mr. Krabs the idea to sell Krabby Patties on board. Plankton wears a disguise as he makes his order, and Mr. Krabs thinks he's "suckered" him into paying $100 for a Krabby Patty. However, when he sees Plankton's money is covered with chum, he asks him where he got it. Plankton triumphantly replies, "From the same place this is going...to the Chum Bucket laboratory!" Plankton removes his disguise and flies off with the patty. Though he stays ahead of the pursuing SpongeBob, he's stopped when he slams into Karen's monitor. She is furious with Plankton, not only because he was after the Krabby Patty all along, but because he ruined their honeymoon. She sets her vacation dial to maximum, despite Plankton's warnings, and happily fires her lasers, destroying the ship by cutting it in half. The passengers (and the captain, who grumbles, "If I weren't on parole!") row away in lifeboats and some jump off the ship, as well as Plankton and Karen. Mr. Krabs laments the loss of his customers, while Plankton and Karen are seen rowing away in a lifeboat. The episode ends with Plankton playing the role of the gondolier, to his wife's amusement. 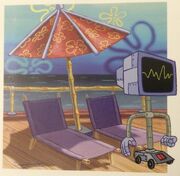 Retrieved from "https://spongebob.fandom.com/wiki/Walking_the_Plankton?oldid=3553237"
Community content is available under CC-BY-SA unless otherwise noted.