Vote for SpongeBob is a book written by Erica Pass and illustrated by Harry Moore. It was published by Simon Spotlight/Nickelodeon on January 8, 2008 and reprinted on Kindle on May 4, 2011.

SpongeBob has election fever and he has it bad! Competing with Squidward to be the Krusty Krab's first Royal Krabby, he is forgetting all about work to get votes, and Mr. Krabs is too pleased.

The cover shows a poster with a picture of SpongeBob on it wearing a "Vote Sponge" button, with the book's title on it. It has the number #17 in a dark blue flower pattern in the corner and a banner at the top with the same pattern.

The reprint is the same cover as the original but with the new SpongeBob logo, a darker wooden background, and without the dark blue flower pattern corner and banner. 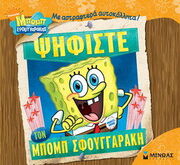 Greek cover
Add a photo to this gallery

Retrieved from "https://spongebob.fandom.com/wiki/Vote_for_SpongeBob?oldid=2581015"
Community content is available under CC-BY-SA unless otherwise noted.