"The Paper"
"Valentine's Day" is a SpongeBob SquarePants episode from season 1. In this episode, SpongeBob and Sandy try to give Patrick a Valentine's day gift.

It is Valentine's Day and SpongeBob is busy giving Valentines to all his friends. He is also working with Sandy to give Patrick a very special present - a hot-air balloon made of chocolate. SpongeBob tells Patrick he has a present prepared for him and Patrick is desperate to know what it is, but SpongeBob will not tell him.

SpongeBob takes Patrick to a Valentine's Day carnival and Patrick thinks that this is the present, only to realize that it is not. As he tries to figure out what the present is, Sandy flies the chocolate balloon to the carnival. Unfortunately, a group of ferocious scallops attack her and she tells SpongeBob that she is going to be a little late. She tells him to bring Patrick up to the Ferris wheel and that she will meet him there.

SpongeBob tells Patrick his present is on the Ferris wheel. Meanwhile, the scallops cause the balloon to lose air, so she tells SpongeBob to switch to plan B. Therefore, Patrick's present is limited to a "friendly handshake," and he is grumpy for the rest of the day at the carnival. Later, the two are sitting on a bench, when everybody thanks SpongeBob for giving them presents. Consumed by anger and jealousy, Patrick goes berserk and wreaks havoc across the carnival.

He ends up cornering several citizens, including a frightened SpongeBob, at a dead-end at the Goo Lagoon dock. Just as he is about to attack everybody, Sandy comes down just in time with the repaired chocolate balloon, having gotten the scallops to help her bring it to him. SpongeBob and the citizens tell Patrick to turn around, but he does not budge. When Sandy greets him, he finally turns around and notices the chocolate balloon. He gets excited and jumps on the balloon, only to pop it when he eats it as it was a bubble. As the episode ends, Patrick gently tells SpongeBob that he didn't have to get him anything. 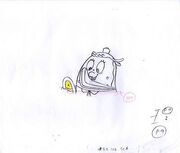 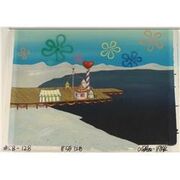 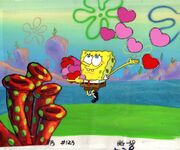 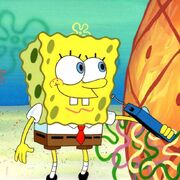 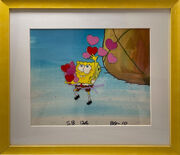 "The first great Patrick episode! I love how Patrick instantly goes from having his feelings hurt to an Incredible Hulk-like rage. Bill Fagerbakke really came into his own in this one."