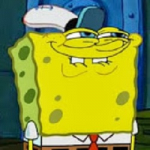 781 Edits since joining this wiki
March 28, 2014
0 Discussion posts
THIS USER DOES NOT WANT YOU EDITING THIS PAGE

These seasons are great

While there are a few episodes I like from this era, these seasons are mostly not so great.

Retrieved from "https://spongebob.fandom.com/wiki/User:YouDontKnowSponge?oldid=1171035"
Community content is available under CC-BY-SA unless otherwise noted.