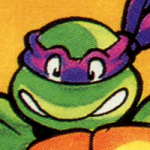 Yo. I am pretty new to this site because I've been a low-key SpongeBob fan for years. Never really went into communities or anything, I just enjoyed it by myself in my own free time with my limited selection of DVDs which were from seasons 1-5. I stayed away from season 6 and beyond because of the bad notions of modern SpongeBob and the mass hate it gets. I assumed it all to be bad, but eventually I sat down and watched it and was pleasantly surprised by some great new episodes which rejuvenated my interest in the franchise. Since then I've been keeping more up to date with SpongeBob, and, as you might have noticed, I've decided to open up to the fandom as a whole so I can share my love for this series that is steadily increasing in quality.

I do some SpongeBob reviews on my YouTube Channel, I write SpongeBob related stuff on Archive of Our Own, and very occasionally I draw SpongeBob fan art on DeviantArt, but most of my time is just spent here on this wiki.

Three things I love in a character; grumpy, witty, and completely full of themselves!

His cute, child-like innocence is the main draw of the show.

Also very likeable, although I prefer him in the earlier seasons.

A flawed yet charming and likeable oaf.

Similar to the appeal of Squidward. In Plankton's case, it's more for his eccentricity.

It had great animation, great laughs, and I love the whole idea of Squidward loving something other than himself.

Another Squidward episode. He is my favourite character, after all. The best episodes are always the ones that bring out the most in the characters and/or the joke department, and this one is no exception. Squidward is really sweet to SpongeBob.

Out of every SpongeBob episode I've seen, which is all of them, this is the only one that I hate with a passion. One Coarse Meal and Ink Lemonade have one or two laughs, but there is no salvation with Stuck in the Wringer. The visuals are bad, the moral is bad, not to mention nonsensical, unoriginal and fundamentally broken, on top of being cruel, mean spirited, and incredibly unfunny from start to finish.

This episode can be summarised in one word: ANNOYING! The visuals are annoying, the sounds are annoying. It's gross and unpleasant. It's poorly written. The only other thing that can be said is that at least it doesn't involve suicide, and it's not as needlessly cruel as my number one.

Patrick feels like his usual self in this episode. The only part I thought was overdone was the flame thrower scene. People say Patrick really mistreats Gary here, but, does he? Sure it was clumsily, but he fed him, bathed him, and showed some care. Gary is happy at the end. I understand the hate, but I don't think it's deserving of it.

Kind of boring in parts, but I thought a lot of the jokes in this episode were really funny. Including both of the suicide ones. The plot itself is a little forced since Squidward has plenty of happy memories, and the ending was weak, but the rest was okay and it had a lot of creative imagery. Maybe it's because I like dark humour. I've always enjoyed this one, and probably more than I should.

It's gross and not funny. So why do I like it? Well, I believe the writers just wanted to tell a unique idea and that they did. It wasn't made for comedy. While SpongeBob getting blamed and the scene where he leaks pus which was pretty nasty, I admired it for the portrayal of quarantining infectious disease. There is this certain air of relatability and realism about it. In short, I always thought it was an interesting episode. 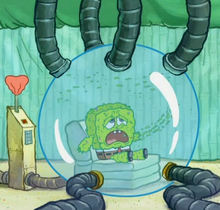 The main reason why this one isn't liked is because it's an episode based around SpongeBob crying, which is annoying. But he only cries for like two minutes. Come on, guys. Crying aside, the episode is passable and I definitely did not think it was bad. In fact, I found it really cute.

"Why, yes, I'd love another spot of tea Mr. Vacuum Cleaner." 

I don't mind this episode. Squidward's 'torture' is very minor slapstick, he gets SpongeBob's house at the end, which is now just a complete replica of his now anyway. I didn't find the replica of Squidward's house creepy, only those two scenes of SpongeBob breathing. But that's not enough for me to consider it anywhere close to bad.

"Pay no mind to that, wubbie-wubbie. I will always love you."

Never found this episode gross, or even creepy. It's only a sandwich and, like most detailed SpongeBob close-ups, I thought the shots of the patty with maggots in it were just for exaggeration. The song is okay, and while SpongeBob killing the clams was bad and out of character, the rest is fine in my book. Plus, call me sick, but I secretly liked seeing him eat it at the end. 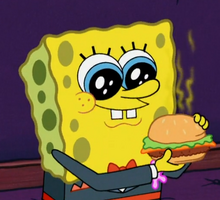 Rating of All Episodes and Movies

note: Scroll bars below tables may take some time to appear.

Everyone is my friend, but these are the ones I speak to most often:-

Here are my ratings and thoughts on other various SpongeBob properties that aren't the episodes or movies.

1. The Best Day Ever - The SpongeBob SquarePants Movie

4. I'm Not a Loser - SpongeBob SquarePants: The Broadway Musical

5. What Shall We Do With the Drunken Sailor?

Although I am a big SpongeBob fan, I cannot say the same for musicals. I'm cool with the songs in SpongeBob because they are usually infrequent (unless it is Atlantis) and always at least half-decent, but musicals have so many that they limit my overall enjoyment because I prefer plot and character over everything else. With that in mind, the SpongeBob Broadway is okay. The casting and designs were great, with all of the actors very accurately portraying the cast of the show.

I thought that some of the writing could've been better, though, and that they should've more closely linked the musical to the show. For example, the plot of a volcano threatening to destroy Bikini Bottom has already been tackled in Sponge-Cano. I'd maybe give this a pass if they referenced the name of the volcano from Sponge-Cano, paying omage to a modern episode, albeit a weak one. Instead they create a new volcano called Mount Humongous. I was a little disappointed in that aspect. Also, there aren't that many jokes.

As for the music itself, considering the fact that there are more than ten songs, they are serviceable but I only think two are very good and memorable. Those being Bikini Bottom Day, the opening number which they of course put the most effort into, and I'm Not a Loser. Squidward gets the best songs, man. To be fair those two are pretty good songs but the rest are not bad but rather forgettable and could've been better. Sponge Who Could Fly was 24 minutes yet still has more good songs, at 3. This musical is over 2 hours.

Another complaint I have is the fact that it recycles SpongeBob's goal from the first movie, which was to prove to Mr. Krabs that he is worthy of being manager. Speaking of Mr. Krabs, I didn't like him here. He is unusually disrespectful towards SpongeBob. This is unfortunate because he is one of my favourite characters. The rest of the cast was fine, though. And as I said, the designs were very good. That includes the costumes and the backdrops. The choreography was fantastic, even in the bland songs. Visually the musical was excellent.

Overall Rating - Okay. High production quality and very well-made for a musical, but since it's a musical it just isn't my cup of tea. For a SpongeBob property it's cute and just fine.

Not much, to be honest.

Retrieved from "https://spongebob.fandom.com/wiki/User:Squiddddd?oldid=1912687"
Community content is available under CC-BY-SA unless otherwise noted.