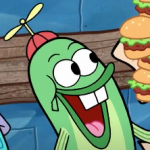 Ahoy-hoy, random profile viewer! On the FANDOM group, I'm known as "SqueakyCartWheel", and I'm a cartoon fan (both old and new) out of New England (I'd rather not reveal my exact location for privacy reasons). I've been a fan of the little square dude for quite sometime now, and I think it was sometime in 2015 when I really started getting into the world of the porous freak and the rest of his Bikini Bottom compatriots. Other than SpongeBob, my favorite 'toons include the classic adventures of Tom and Jerry and the Looney Tunes, Ren and Stimpy (I know what the creator's done, but to me that doesn't diminish the impact this show had on TV animation as we know it), and Gravity Falls. Other cartoons I personally enjoy include DuckTales (2017), Animaniacs, Rocko's Modern Life, Phineas and Ferb, We Bare Bears. Milo Murphy's Law and VeggieTales (although I'm not Christian, I still enjoy it for its humor and for the musical stylings of a certain talking cucumber).

I'm also a bit of a production music and sound effects geek, and you'll also find me on the SFX Wiki as well (yup, there's a Wiki for that), as well as a bit of a writer. Feel free to leave a message on my wall if you're interested in a sampler. I'm also one of a small handful on this Wiki who genuinely love the original music composed by the incredibly talented in-house team of Nicolas Carr, Jeremy Wakefield, Sage Guyton, the late Barry Anthony, Mike Bolger, Steve Marston and many others - as well as quite probably the only member here who deeply appreciates the sound design of Jeffrey Hutchins. That man is as essential to this show as Tom Kenny's voice or Jeremy Wakefield's steel licks. (There's also "BigIdeas70258", but he contributes more to other wikis).

(Oh - why can't there be a userbox for liking original music? Same for being part who I personally call "The Incidental Group" - me, MagicSponge, Salamandersandwich, and a couple other users).

If you're wondering what my username means - well, it's actually the official name for that squeaking sound used for Squidward's bike in "Squidville".

Retrieved from "https://spongebob.fandom.com/wiki/User:SqueakyCartWheel?oldid=3202445"
Community content is available under CC-BY-SA unless otherwise noted.