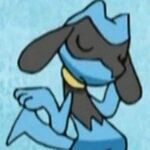 Role in the Fandom

Riolulover2004 is a user that goes to the Encyclopedia Spongebobia but he's in the Riolu and Lucario species. He's pretty inactive in the ESB chat and sometimes on discussions because he is also a bit busy.. His favorite is drawing Pokémon and edit on articles so he can get 1,000 edits badge. He doesn't like to get mad for a bunch of users that acts like a nuisance.

Considered to be a Riolu in the fandom he draws Pokémon, a few of his masterpieces like the Lucario, Oshawott, Leavanny, and Chespin drawing that he made it on ibisPaint X.

The reason why he made it on both of these wikis because of the newer SpongeBob episode SpongeBob in RandomLand, when Squidward opened a few doors and the last door shows Red Mist Squidward appears on Squidward's room.

He is completely unknown to this day, and nowhere to be found on homeworld.

League2004 a nice guy and also a friend to the users in discussions until he left in 2020.

Regawin the Astronautor as Regawin 2.0 considered as a friend like League2004 until he left because he lost interest to this wiki.

DyaboytheSBSPfanboy he started acting very since November until he started cussing, other wikis that are against the rules, posting stuff that is not from SpongeBob but from different shows.

King Puma is a nice guy but until Gabe Ruiz started stealing his profile pic, which they both caused a fight. Until later he changed his name into Coopk111.

Gabe Ruiz Gabe Ruiz started acting nice in the beginning until he stole Coopk111's profile pic and starts saying mean things until he got blocked by Anthony2306 for 1 to 2 weeks. His favorites is liking Blaziken and disliking Pokémon Sword and Shield. After the drama he changed his profile pic and its says "Coopk111 bullied me". In January 2020 a new rule which Riolulover2004 made is called "Don't steal a user's profile pic".

Retrieved from "https://spongebob.fandom.com/wiki/User:Riolulover2004?oldid=2613176"
Community content is available under CC-BY-SA unless otherwise noted.