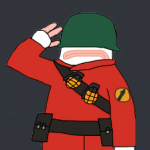 I have been editing Encyclopedia SpongeBobia since I had been new to Wikia. I edit a couple of other wikis, but also editing here occasionally too. Mostly I edit My Singing Monsters Wiki, hence my blue gorilla in headphones profile image, and also Bloons Wiki too.

I have promotions as Content Moderator in Bloons Wiki and My Singing Monsters Wiki.

I also create various animations, such as the animation with the Apple voices as heard on Macintosh computers that you can see at the right (or at the top if you are looking at mobile).

Note that I have grown up mostly in small wikis, less so large wikis like this one. So I may sometimes forget certain procedures for big-wiki sorts of thing. Also, sometimes I may make poor grammar accidentally of unintention to type quicker.

I had been editing a lot earlier, but have edited much more strongly since October 4th 2016. Funny that I met the Halloween art some time around October 15th or so, rapidly changing in 5:20 UTC November 1st 2016.

I watched SpongeBob since I was younger, and since have related aspects of life quite well. I even watch SpongeBob nowadays, though I do this mostly for helping improve this wiki more easily. But sometimes I may watch just for fun.

My first episode I don't specifically remember. However, one of the first episodes I remember watching was Opposite Day. And I confused this as the first SpongeBob episode, even though Help Wanted is a lot earlier than that.

My favorite episodes are really difficult choose from as to pick one single most favorite. However, I do enjoy many Krusty Krab and/or Plankton episodes quite well. I don't seem to enjoy pet-related episodes, and I seem to dislike this episode type the most, especially the dreaded Season 7 pet torture episode (Shall I say it? No, so figure out yourself).

I enjoy editing this wiki for the purpose of both just helping the wiki and for helping to aid my understanding and enjoyment of SpongeBob. I edit best on galleries and transcripts, but also APM stuff too, though I am best in galleries.

I created my own version of SpongeBob SquarePants called "SpongeBob MacPants", involving a bunch of mostly logos of famous companies and/or their products. They are represented as (so far): 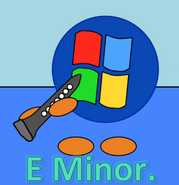 Windows Vista playing the clarinet
Add a photo to this gallery

I do mention a lot about My Singing Monsters, so don't worry if I mention so much of that stuff.

Basically in My Singing Monsters, you breed and buy monsters that sing and play music. The aim is to build your own monster orchestra, but the way you do so is up to you.

For more info of this MSM stuff, see this link at My Singing Monsters Wiki.

I am in real-life a New Zealand teenage boy, passionate in SpongeBob, My Singing Monsters, and Bloons TD 5.

I play the cello since 2010, after not enjoying the violin's shoulder rests. I play the piano, but not to a high extent. I will play the clarinet from mid-April 2017, with inspiration of Squidward and so I can exercise my tummy muscles (don't want a potbelly).

Qwertyxp2000 the second is a discussion mod on Encyclopedia SpongeBobia and an admin of Bloons Wiki and My Singing Monsters Wiki. In Encyclopedia SpongeBobia, he monitors the comment sections of every article he explores, as well as occasionally checks the forums. His motivation for the wiki is driven primarily by editing wiki articles and expanding episode galleries.

In 2019, Crewcards were developed. Here is my Crewcard for reference of my intentions for the wiki.

I have various favorites, mostly from Seasons 1-3.

I did not like much of the "New SpongeBob" episodes, but my least favorites...

Some seasons were very hard to decide, particularly Season 1, 2 and 3, since many of my favorites are at those seasons, and also Seasons 6, 7 and 8 because of their notorious reputation.

Note that I haven't seen certain episodes, but I do feel they are good by interest by articles in the wiki.

I haven't seen Season 10 at all, but I feel one better than the other by article interest.

Season 7 is easy to find worst, but I found some difficult, like Seasons 1, 2 and 3. For Seasons 1-3, I found the ones I didn't appreciate the best. For all others, even though I haven't seen some episodes before but feel are very bad episodes, they are whatever is worst.

Episodes I dislike that others dislike

Hateable episodes that deserve hate but are overhated

"PosNegs" are basically screenshot portrayals of the episode in a positive light and a negative light using respective screenshots that reflect such light.

Or another example, I'm With Stupid. While I really enjoy this episode, I do acknowledge that there are very negative scenes too, such as the scene where Marty and Janet are laughing weirdly, perfectly reflecting the dark side of the episode. While I am not offended by the episode's negative scenes, such scenes do show the dark side of the episode. The positive light though is probably more difficult to convince, despite how much I love this episode. 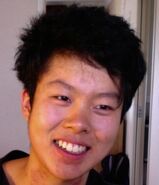 For those wanting a real me, don't ask me; just look here

Deedge and Congle talk to each other, like the Krab Borg scene about the bee-boo-boo-bop

OMG! I remembered when I had exactly 2000 Achievement Patties!

The award where I got my exactly 2000 Achievement Patties, an edit to "Krusty Phone" 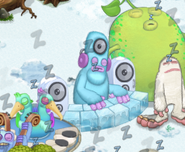 Expanding the Best Frenemies (gallery) has helped me to get to the leaderboard list! 2000 edits to articles + 5500 images to articles nearly at the same time! 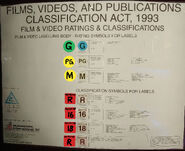 For those wondering what I mean by "M" rating, that is just PG-13 in my country. From my local cinemas. Also look here.

Solitude in E Minor
Add a photo to this gallery 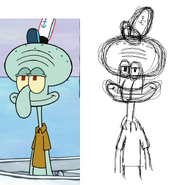 My sketch of Squidward from Little Yellow Book (his nose isn't big enough, but oh well)

My SB-129 Day entry
Add a photo to this gallery

Videos of SpongeBob scenes I made

SpongeBob MacPants 1 - Is this the Krusty Krab?

SpongeBob MacPants 5 - Squidward is my best friend in the world

Some meme stuffs I was making

Feel free to use my "We have technology" meme

Template structure for how to use my "We have technology" meme

The real quotes of "We have technology" for reference

Feel free to use my "The Ugly Barnacle" meme

Template structure for how to use my "The Ugly Barnacle" meme

My "The Ugly Barnacle" example with the criticism of Donald Trump

The real quotes of "The Ugly Barnacle" for reference 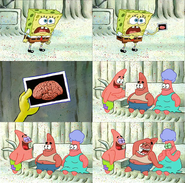 Feel free to use my "I have a brain" meme 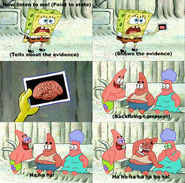 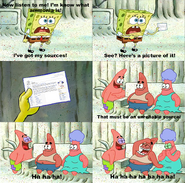 My "I have a brain" example, criticising Wikipedia (for fun of course) 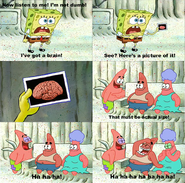 The real quotes of "I have a brain" for reference

You can still make memes with MS Paint. Link. 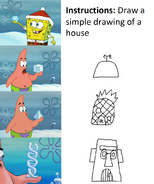 But I Don't Like Pistachio But Verbose. Link.
Add a photo to this gallery

Retrieved from "https://spongebob.fandom.com/wiki/User:Qwertyxp2000_the_second?oldid=2181176"
Community content is available under CC-BY-SA unless otherwise noted.