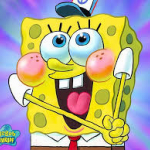 Why Would You Pay Attention to Me?

Till the SpongeBob: The Movie!

Welcome <insert name here>, to a page filled to the brim with...well...stuff! You'll find a poll, my favorite episodes, some things about me, and some information on a WIP comic I'm writing!  Leave me a message on my wall to talk, or just say hi!  NatRox (M•C•E)

I am a cartoonist.  I draw a series known as Bishop and Herman.  It is currently in the production process.  I am currently scripting and writing another series that will have to go unnamed.  I enjoy early 90's NickToons like Rocko's Modern Life, Ren and Stimpy, but I LOVE SpongeBob SquarePants!

Here's a poll!  At the end of the week we'll have a winner!

Bishop and Herman is a comic I am developing about two next door neighbors.  However, Bishop is a scientist who has a secret lab.  Herman is simply a good-hearted guy who owns a resteraunt.  The two have wacky antics together because most of Bishop's experiments go wrong.  It has very loose off model faces, like Ren and Stimpy or modern SpongeBob.  It is currently in late development and I am looking for a scanning copy machine to produce it.  It takes inspiration from many shows, such as Dexter's Lab, SpongeBob, and Gravity Falls.

Favorite Episodes from each Season

Season 5 - The Two Faces of Squidward

Season 7 - The Abrasive Side

Season 8 - It's a SpongeBob Christmas!

Retrieved from "https://spongebob.fandom.com/wiki/User:NatRox?oldid=1530150"
Community content is available under CC-BY-SA unless otherwise noted.