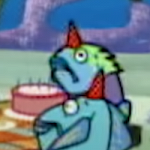 Luigi von Cheeseburger Jenkins IV, better known in FANDOM as LuigiYCompañía or simply Luigi, is a user in Encyclopedia SpongeBobia. His first edit was in the picture-framed snails on April 13, 2019.

Luigi's real appearance has never been shown on-screen. However, he has stated to wear glasses and be dark blond. This could also be seen in an image he posted of him wearing a Luigi hat, but only his glasses, hair, forehead and eyebrows could be seen. In that image, he appeared to have several pimples on his forehead.

For his online avatar, it is basically a low-effort recolored Luigi from Super Mario, only changing the overalls and shirt's colors. He also wears a light teal green cap rather than just a green cap, and the "L" emblem is black instead of green. His pupils are black rather than blue, but it's not the case with is YouTube avatar because he doesn't know how to retexture models in GMod. The latest sentence also applies to his hat.

Luigi was born the first (the second if counted his older brother who died during childbirth) to Mama Luigi and Luigi von Cheeseburger Jenkins II. Soonly after, Luigi was diagnosed with a slight case of stupidity, which explains why he acts inappropiate to his age.

Two years later, Mario, his younger brother, would be born. Luigi wouldn't get very used to him on his early days because Mario's stupidity was in a much higher level that Luigi's.

When he was 3, he met in preschool a kid called Dudu Eleventy-Seventh-kun, an anime fan who would become best friends with him in second grade.

When he was 4, he was introduced to the world of video games when he got a Nintendo DS Lite for Christmas.

He would eventually become a great fan of Super Mario when his mom bought him a M3 DS REAL, a game card capable to contain tons and tons of games in one. He was exploring the games, when he found New Super Mario Bros. and played it. He would later discover more Mario games on the same card, and Mario become his most beloved fictional thing in the world.

One year later, unfortunately, his paternal grandmother would pass away at her 80s, and his paternal grandfather would also pass at 2010. He couldn't spend a lot of time with them due to them passing when Luigi was only 6. As his father never had any siblings and all his father had was some far-distance cousins and a godmother, Luigi would live for the rest of his life solely with his maternal family.

Around 2012, he would become a toxic Mario fan and a toxic Sonic hater due to how people kept saying Mario was better than Sonic. This personality would last until late 2014, when he started to get more mature about said topics.

During these years, he was also jealous of Dudu's other friend, Teps the Lizard, who Dudu would spend more time with than with Luigi.

At the beginnings of 2015, he would first know about furries because of him and a girl discussing the things they liked and disliked. Luigi would soon have more knowledge about that community and decided to explore it. He ended up knowing too much about them in late 2017 and started hating furries for their online inappropiate behaviour as well as real life behaviour, becoming one of Luigi's worst enemies.

His best friend, Dudu, would start having another friendship and ignoring Teps with another guy called Miguebooilli752, whom Luigi found out to be a furry, which made him hate Miguebooilli and become jealous of him again. Despite this, he joined a game developing team created by Dudu where Miguebooilli was a member. Luigi would leave the team in early 2020 because he though Dudu was very bossy and strict. He would later return to the developing team in June of the same year, and it seemed like Dudu was behaving less bossy. On late June, he found a furry called Jay the Fox who wanted to make video games, making Luigi inresistable to ask him if he wanted to join, which went successful and Jay became a member of Corrupted Team, despite Jay not doing anything in the team.

Retrieved from "https://spongebob.fandom.com/wiki/User:LuigiYCompa%C3%B1%C3%ADa?oldid=3284093"
Community content is available under CC-BY-SA unless otherwise noted.