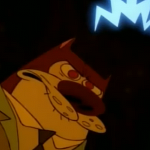 I am Koopsers Joopsers, a user of this wiki. I stop by here to edit pages and talk. My favorite background character is Lenny, and I think it's pretty obvious why, just look at how he dresses!

Deeeddeeedooo dummmdummmdeeeeee! Scroll down enough, and you can find the pinhead.

To be fair, you have to have a very low IQ to understand this user. His sense of humor is extremely bad but a dumb person thinks its funny, and without a solid grasp of unfunny sloppy pictures and CAPS sometimes So most of the jokes will go over a very dumb user's head.

What do you want? I am just a random SpongeBob Fan​​

I mean. Theres nothing to see here, K?

Yay I won this.

The SpongeBob SquarePants Movie is a 5/5 stars. It has a silly ending, Comedy, And tons of more

SpongeBob SquarePants: Sponge Out Of Water is a 5/5 stars too, It also has comedy and the same thing with the first movie!

Phew, now thats outta the way i should do something now....

more coming in the future

Retrieved from "https://spongebob.fandom.com/wiki/User:Koopsers_Joopsers?oldid=3006317"
Community content is available under CC-BY-SA unless otherwise noted.