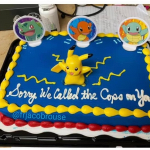 aka NAME AND AN ADDRESS WITHHELD

Hello there <insert name here> Im King Puma (Formerly CoopK1111) and My favorite cartoon is Spongebob Squarepants And IMO It is the GOAT (Greatest Of All Time) I’m most interested In lost media of cartoons like if you scroll down you will see that List of deleted scenes and List of unproduced episodes and List of episodes that got renamed. My favorite character episode is Chocolate with nuts and my least favorite episide right now is unknown. My favorite character of the series is Patrick star and my least favorite character of the series is Bubble Bass. I love sports especially the Milwaukee Bucks, Green Bay Packers, and the Milwaukee Brewers.

Retrieved from "https://spongebob.fandom.com/wiki/User:King_Puma?oldid=2857984"
Community content is available under CC-BY-SA unless otherwise noted.