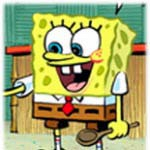 Hi, my name is Jenson Kishore and I was born on September 30, 2000, 1 year after the show premiered. I am an adult boy, although I was a teenager when I first joined this wiki back on March 9, 2014. I have been an avid follower of the SpongeBob SquarePants TV series ever since I joined kindergarten in 2006 and have remained a fan ever since then. SpongeBob SquarePants is my favorite cartoon of all time and I have watched all of the episodes. Additionally, The SpongeBob Movie: Sponge Out of Water is my favorite movie of all time. I was born and raised in Canada. Yep, I am a Canadian SpongeBob fan.

Retrieved from "https://spongebob.fandom.com/wiki/User:Jensonk?oldid=3270981"
Community content is available under CC-BY-SA unless otherwise noted.