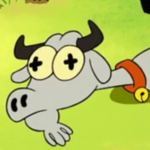 aka the Flying Dutchman!

"Who DARES disturb the Flying Dutchman?!"

For short, you can call me Pen, Dutchie, or whatever. As a discussion moderator, you can come to me if you want to report a user, for me to close a thread, or to resolve an issue.

i'm a fan of SpongeBob SquarePants and have been ever since i remember! my favorite characters in the main cast have to be either Sandy or Plankton. Sandy is really fun and relatable, and Plankton is one of the funniest characters (and a great antagonist).

i also love Squidward, and i have this weird obsession with drawing him. my favorite character of the whole series is (as you could guess by looking at my profile) the Flying Dutchman, he's hilarious as heck!

my favorite era of the show is probably the Renaissance period (seasons 9B-12). it's filled with so much creativity and energy!

if i were a season, i would be season 11. just like this season, i'm hyperactive and very zany!

i love Nintendo games, mainly the Super Mario (my favorite character is Yoshi) and Kirby franchises. and, if you wanted to know, my Smash Ultimate mains are Kirby and Lemmy. my favorite game of all time is Minecraft (i'm 13, so i grew up with it and have been playing it my whole life). i am currently replaying my favorite Super Mario game, Super Mario Galaxy!

i LOVE SpongeBob SquarePants, and it's tied with The Amazing World of Gumball as my favorite show of all time! i'm also a HUGE fan of The Legend of Korra, and have watched and rewatched the entire series twice. my favorite character is Tenzin ("OOGI YIP YIP"), followed by Asami and Varrick.

i'm also obsessed with animation, and i hope to animate at Pixar Studios one day. my favorite film of all time is Toy Story 1, but i love the franchise as a whole. the film that made me fall in love with animation was probably Pixar's Inside Out. it's such a beautiful and funny film, and i highly reccommend it! i also reccommend the Kung Fu Panda trilogy from Dreamworks, it's amazing! i usually spend my time drawing characters from shows i watch (mainly sQuiDwArd TeNtAcLEs), and, well, watching the shows i watch (which are all cartoons, by the way).

click here! thanks to Cmc, for adding the colors!

season 6 is better than season 5

Friend or Foe is only a solid episode, not great

Mr. Krabs is a great character

KKTV is merely a good episode, nothing more

One Coarse Meal is good

i draw way too much, so here's some of my crap. i do digital and traditional art, and (sometimes, if i don't forget or i'm not signing as FTD which is my Pixilart account) sign my pieces with "Pen." :D 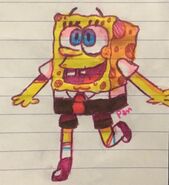 ngl, kinda proud of this one

a gift for the one and only Squiddypop ;)

an art request for Coop i did!
Add a photo to this gallery

Had some great popcorn named after him (Squiddypop)

Has my favorite number in his name (Mav)

Probably the most awesome user on ESB (Anthony)

The sweetest user i know (The Krusty Krab)

A rather underrated admin (Korra)

Honestly, a much better moderator than i'll ever be (Krispies)

That guy with the awesome profile picture (Immortal)

Has some unpopular opinions that i actually agree with (Awkward)

brought me to a blursed wiki.. (TragicTravjt) and many more!

Dude who made the Virtual Boy a religion (Regawin)

Likes The Play's the Thing, so he's great (Spungi)

hi dutchman, my soul is now one of your souls  JellyfishSponge231 (W•C•E)

Hello! You are awesome user and we share many similar opinions!

Retrieved from "https://spongebob.fandom.com/wiki/User:Idroppedmypen?oldid=2715606"
Community content is available under CC-BY-SA unless otherwise noted.