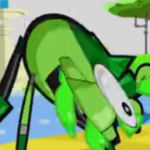 I'm A New User On This Wiki.

Skylanders, (Played 4 Out Of Six Games)

The Amazing World Of Gumball.

STUFF ABOUT ME, W.I.P

Ironically: I Was Born A Month And 15 Days After The Series Premiered.

I Have Two Brothers.

I Also Own The Complete Season 7 Box-Set.

That's It! I'll Have Fun Here!

Retrieved from "https://spongebob.fandom.com/wiki/User:Gobbol943?oldid=1077466"
Community content is available under CC-BY-SA unless otherwise noted.