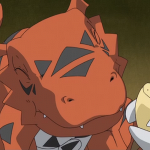 I've been a huge Spongebob fan since early 2000, and I currently own a few seasons on DVD. My favorite character would be Spongebob, and Patrick being my second.

Being a Spongebob fan for almost 13 years now, I have a large number of favorite episodes, some for nostalgic reasons, and others for just being plain awesome. So here are most of them.

Retrieved from "https://spongebob.fandom.com/wiki/User:Girumon?oldid=959558"
Community content is available under CC-BY-SA unless otherwise noted.