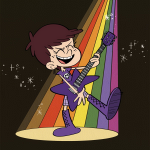 Hello there I am EmilyHReturns, formerly EmilyHarmonizer02, but you call also call me by my real name: Emily. I am an 18-year-old woman from the United States. I love SpongeBob, it's my favorite show among many others that would take too long to list, but others I like are Family Guy, The Fairly OddParents, South Park, Drake and Josh, The Simpsons, Big Mouth, and many others.

I joined this wiki in May 2018 but became more active around July, though I have been lurking for a while ever since 2014.

I became promoted to rollback in October 2018 and to assistant in November.

Sometime during the middle of 2019 I retired not only because I was busy with real life but because I was overall getting bored of FANDOM and feel I didn't need an account anymore so I disabled it. But no worries though I'm back and will very likely be more active and stay like that for a while.

I am a bisexual female who is a member of the LGBT community. Love is love. 🌈

Aside from SpongeBob and animation in general, I also love music, particularly my favorite girl group, Fifth Harmony (Camila Cabello is my fav ❤). I'm also a fan of K-POP and BTS, Cimorelli, Little Mix, Billie Eilish, Ariana Grande, and twenty one pilots.

I have watched SpongeBob ever since I was little and love the post-movie episodes almost as equally as the pre-movie episodes. My favorite episode is "Toy Store of Doom", a major unpopular opinion of mine. "As Seen on TV" comes as my second favorite: SpongeBob mistaking himself as a celebrity despite only appearing on TV for 3 seconds was incredibly hilarious!

I want to be as helpful to the wiki as possible and collaborate with the community in making good edits.

Below is a list of my friends, some of whom have retired or aren't as active as others. Shout out to you awesome people. :)

8.) Sheldon J. Plankton
Add a photo to this gallery

Retrieved from "https://spongebob.fandom.com/wiki/User:EmilyHReturns?oldid=3045708"
Community content is available under CC-BY-SA unless otherwise noted.