Hello Guys, I’m A Huge Fan Of Spongebob And I Have Been On Fandom Since July 23, 2016, But I Have A Habit Of Spamming, Which Is Inappropriate, I Am A Teenager Kid Who Watches Other Stuff As Well And Plays Games.

Spongebob
Add a photo to this gallery 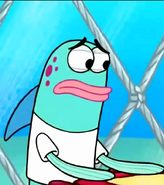 Squidward
Add a photo to this gallery

Characters I Don’t Care About

Mr. Krabs
Add a photo to this gallery

My Opinions On Characters

I am quite obsessed with Nat Peterson‘s character in most of his appearances, he usually is seen as a laid-back but somewhat lazy yellow fish, he appears as a background character with a major appearance in Plankton's Regular, as a frequent customer at the Chum Bucket, He is very funny and i like this dude.

I‘m not really happy with Mr. Krabs’s Character Development, because i am neutral over him in many episodes, But I can’t hate him since they are sometimes i love him!

Where You Can Find Me

Wikis You Can Find Me On

To see the various wikis I edited, click Here

Retrieved from "https://spongebob.fandom.com/wiki/User:DyaboytheSBSPfanboy?oldid=3025359"
Community content is available under CC-BY-SA unless otherwise noted.