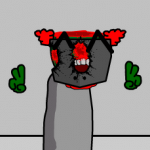 Will it be Spongebob Wiki?

Yes, but really make a good page or something for badges. Which I like. My name is Carklebob Fizzlepants. (Carkle100)

He appeared in Roblox with a green shirt and jeans with a present, a scarf, and a blue bandana. Which is on his head.

He is also male.

Me! It was a made up name. I used it just for fun!

CarkleBob FizzlePants is a debut character, but he didn't appear in the show, he is a user. This username is made up. It was used by Carkle100. It was similar to the name, SpongeBob SquarePants.

There is also a video here.

I have owned 2 silver badges:

Retrieved from "https://spongebob.fandom.com/wiki/User:Carkle_the_Animatronic?oldid=1215354"
Community content is available under CC-BY-SA unless otherwise noted.