View source
If you were looking for the article about the amusement ride, then see Tunnel of Glove (ride).

The episode begins with Pearl and her friends Nancy and Gale going to Glove World! They see everyone is waiting in line to ride the Tunnel of Glove and they hurry to get in line. SpongeBob and Patrick walk by and SpongeBob greets Pearl, but Pearl angrily asks why is he talking to her. Nancy and Gale ask if SpongeBob is her boyfriend. They also make SpongeBob stand next to Pearl and they take a picture of them "for posterity." Pearl says SpongeBob is not her boyfriend and she and her friends head for the ride. Patrick stays behind to eat cotton candy, so SpongeBob heads off to the Tunnel of Glove without him.

Nancy and Gale get a boat to themselves, but Pearl has to wait because she is a single rider. The ride operator asks for another single rider to come forward, which happens to be SpongeBob. Pearl and SpongeBob get in a boat, but Pearl rudely tells SpongeBob to leave her alone. Pearl finds the Tunnel of Glove boring, and SpongeBob's pointless stories about Mr. Krabs do not help. Pearl tries to exit the ride, but SpongeBob holds her back since they are not supposed to leave the boat. SpongeBob is accidentally launched out of the boat when it rocks and he hits the ceiling, causing the hearts from the ceiling to fall down. One heart gets stuck in the operating gears, leaving SpongeBob and Pearl stuck on the ride.

Three hours later, Perch Perkins arrives to do a broadcast on the ride. He makes a big deal out of it, saying a "doomed couple" is trapped inside. Nancy and Gale, who managed to get off the ride before it broke down, tell Perch that Pearl and her "boyfriend" SpongeBob are the couple in there. Patrick, pigging out on food, hears the newscast and, with Perch's encouragement, runs towards the ride to save SpongeBob. Patrick is unsuccessful because the police will not let anyone through the front entrance, so he decides to find another way in. He runs into the Glove World Power Plant and mistakes an electrical generator for SpongeBob due to the fact the generator is shaped like him. Thinking that SpongeBob is chained to the wall, Patrick pulls the generator off of it and causes the electricity to go out on the ride. SpongeBob freaks out and tells Pearl about all the creepy creatures in the dark (mostly clowns), but Pearl ignores him and leaves the boat to find a way out. SpongeBob follows and continues talking about scary creatures and monsters, scaring Pearl in the process. They get scared by one of the ride's robotic cupids and get back in their boat. Pearl asks SpongeBob to hold her because she is so scared.

Patrick plays board games with the generator when an electrician appears to fix everything. Patrick angrily accuses him of kidnapping SpongeBob, but the electrician has no idea what he is talking about. Patrick sits down on a lever and breaks it, sending the Tunnel of Glove ride into super-fast mode. SpongeBob and Pearl's boat speeds into the Hall of Romance, which features animatronic figures depicting famous love scenes. Patrick also accidentally pushes a button labeled "Animatronic Override," making the figures' heads explode and go after SpongeBob and Pearl like zombies. Patrick breaks the ride even further by using the water supply room as a restroom and tampering with the extreme water pressure. The water pressure causes SpongeBob, Pearl, and the figures to go down a waterfall and whirlpool and The Tunnel of Glove itself floods and explodes. SpongeBob and Pearl are safe and Pearl admits that the ride was actually pretty fun. Nancy and Gale walk up and think SpongeBob is definitely Pearl's boyfriend because they were hugging, but Pearl once again says they are not dating. A crawly clown robot climbs out of the wreckage and scares SpongeBob (since he told Pearl he is afraid of crawly clowns). He and Pearl's friends cling to each other in fright and Pearl takes a picture of them for revenge. Meanwhile, Patrick shares food with the generator because he still thinks it is SpongeBob. 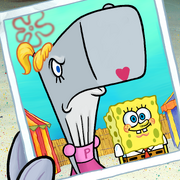