Trash Stalkin' is the fourth comic strip in the SpongeBob Comics No. 15.

The comic starts with SpongeBob taking out the garbage while singing a song about it, much to the dismay of Squidward. Squidward yells at SpongeBob as he put his garbage next to his house again, but SpongeBob shows Squidward a pamphlet stating "Proper placement of your trash receptacle." Squidward rips up the pamphlet since he's still angry that SpongeBob was stinking up his yard and house. SpongeBob tells Squidward he is ripping up an important publication of Bikini Bottom at that he is littering. Squidward asks SpongeBob if he can just put his trash on the other side of the house, but SpongeBob says that's not allowed.

Afterwards, SpongeBob asks Squidward what the Garbage Fairy looks like, to which Squidward says he has delicate wings, a tutu, a wand, ballet slippers, and a glittering tiara made of the most beautiful garbage ever seen. Squidward then goes inside his house and laughs at how easy it was to convince SpongeBob to put his garbage on the other side of his home. Weeks later, Squidward wakes up to the smell of SpongeBob's garbage, which has piled up immensely, shocking Squidward.

Squidward goes to SpongeBob's home and when SpongeBob comes out, he sees that Squidward looks different, since he has a clothespin on his nose due to the smell. SpongeBob tells Squidward since he put so much garbage out, he will get a huge reward, while Squidward gets completely disgusted. SpongeBob thinks the Garbage Fairy will come any night now, and then right after, a garbage truck appears. Squidward tries to call the garbage truck, and gets it to stop, but the guy won't pick up SpongeBob's trash as it does not follow the pamphlet about where to put garbage. Squidward rips it apart, but that just makes the garbage collector tell Squidward he's not picking the ripped pieces of the pamphlet up.

Later, Squidward goes out of his house, thinking the coast is clear, but then bumps into Patrick, who is sleepwalking. Squidward almost reveals his identity to him, but quickly tells Patrick he is the Garbage Fairy and moves him away. Squidward gets mad that SpongeBob is not even there that night, but then SpongeBob appears right after, extremely happy to see the Garbage Fairy. However, he questions why the fairy doesn't have a wand, as Squidward told him he would have one to make all the garbage disappear. Squidward rips out a coral and tells SpongeBob's it is his wand, but then SpongeBob asks him where his tiara is. This makes Squidward put garbage on him to make it seem like his tiara is made out of beautiful garbage.

SpongeBob questions that the tiara does not glitter, which makes Squidward snap and reveal that he is not the Garbage Fairy and there was no such thing as one. Right after, the real Garbage Fairy appears and says that he is real. He then says he does not like people pretending to be him, and zaps Squidward as a result, with SpongeBob thinking the zaps are fireworks. In the background, Patrick is seen saying that he had the best sleepwalk ever. 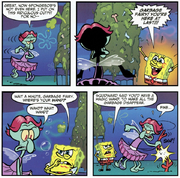 Add a photo to this gallery
Retrieved from "https://spongebob.fandom.com/wiki/Trash_Stalkin%27?oldid=2784139"
Community content is available under CC-BY-SA unless otherwise noted.