Start a Wiki
watch 02:18
SpongeBob Profile: Tom Kenny
Do you like this video?
This is the page about the voice actor. For other uses, see Tom (disambiguation).

Thomas James "Tom" Kenny (born July 13, 1962; age 58) is an American actor, voice actor, singer, and voice director. He is a main cast member on SpongeBob SquarePants, voicing SpongeBob, Gary the Snail, and the French Narrator. He also portrays the series' host, Patchy the Pirate, in special episodes and a large amount of Nickelodeon commercials.

Kenny is the husband of Jill Talley (the voice of Karen Plankton). He is the only cast member to provide a voice role in every episode (with the exception of the dialogue-free episode "Reef Blower"). He has written several songs for the show, like "The Best Day Ever," and has held the position of voice director since season 9.

Tom Kenny is a prolific voice actor outside of SpongeBob, known for voicing characters such as the Ice King in Adventure Time, the Mayor in both incarnations of The Powerpuff Girls, Heffer in Rocko's Modern Life, and Dog in CatDog.

He is part of a rock-and-roll band called Tom Kenny and The Hi-Seas.

Note: This list does not include the Patchy the Pirate appearances.

The following is a list of works where Tom Kenny played a role, outside of the SpongeBob SquarePants series. 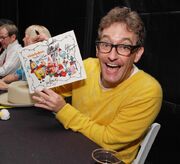