Encyclopedia SpongeBobia
Register
Don't have an account?
Sign In
Advertisement
in: Characters, Characters with one appearance, Male characters,
and 4 more
English

View source
If you were looking for the article about the crew member, then see Todd White.

Todd SquarePants[1] is SpongeBob SquarePants' long-lost cousin. He appears in the book The Never-Ending Stay.

He looks similar to his cousin SpongeBob except he has a black mustache and goatee, round black glasses, a white shirt, orange-and-blue-striped pants, a red tie with olive green dots, and purple and white shoes.

Unlike his cousin, Todd is a very messy person, as his socks are so smelly that Squidward tries to complain about it, but SpongeBob does not let him. Also, when SpongeBob and Patrick come back from Patrick's house, there are smelly socks and empty pizza boxes everywhere.

When he was an adult, he stayed with SpongeBob for a few days. He mostly lazed around the house and made nothing but a mess in his cousin's home. 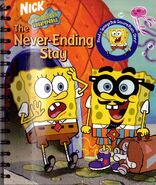