If you were looking for the article about the DVD, then see SpongeBob's To SquarePants or Not to SquarePants.

"Shuffleboarding"
"To SquarePants or Not to SquarePants" is a SpongeBob SquarePants episode from Season 6. In this episode, when SpongeBob's square pants shrink in the washer, he must find new pants.

The episode starts with the narrator talking about a horrible tragedy, while showing an over-water hurricane, followed by footage of the 1940 collapse of Tacoma Narrows Bridge (Galloping Gertie), with a man running from the bridge before its collapse. After that, the scene cuts to a rainy day at SpongeBob's pineapple where inside SpongeBob is looking at the calendar. The narrator says that the tragedy happened three days before, as the calendar flips back to January 7. SpongeBob is seen doing chores, including laundry, with his pants and Gary's shell. Patrick then calls SpongeBob to show that he can make funny sounds with his tongue for a very long time; SpongeBob asks Patrick if it can wait, but Patrick refuses, so he continues on, making SpongeBob bored by sitting on the chair for so long.

Meanwhile, Gary gets his shell out of the laundry. By the time SpongeBob gets to the laundry machine, his pants had shrunk. He goes to the store to buy new ones, but Patty Rechid declares that there will not be any square pants for months. He then looks through the pants, he tries many pairs but is not interested, he then finds a pair of round pants with the same design as his normal pants. 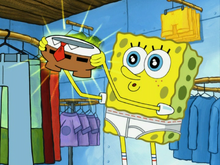 SpongeBob gets his job at the Krusty Krab again and looks to Squidward for pointers. Squidward gives SpongeBob his bad routine of being a Krusty Krab employee, including not throwing the trash in the dumpster, being rude to the customers, nasally laughing like Squidward, burning Krabby Patties, taking too long in the bathroom, and even sleeping on the job. Mr. Krabs realizes what is going on, and he does not joke around when he sees SpongeBob. SpongeBob then tells Mr. Krabs that he cannot be SpongeBob SquarePants again, as he has round pants. Mr. Krabs asks him who told him this and SpongeBob states it was Patrick, who stops eating a Krabby Patty when he realized his error of not recognizing SpongeBob in the first place. Mr. Krabs then suggests that he just remove them if that is the case. Then, SpongeBob takes off his pants, while Sandy calls him "SpongeBob UnderPants", and the episode ends with SpongeBob looking at his underwear and screaming with embarrassment.

Retrieved from "https://spongebob.fandom.com/wiki/To_SquarePants_or_Not_to_SquarePants?oldid=3443681"
Community content is available under CC-BY-SA unless otherwise noted.