Start a Wiki
This is the page about the time machine from The SpongeBob Movie: Sponge Out of Water. For other uses, see Time machine (disambiguation).

The SpongeBob Movie: Sponge Out of Water: The Junior Novelization

The time machine is a machine used by SpongeBob and Plankton in The SpongeBob Movie: Sponge Out of Water.

The time machine appears as a photo booth with a blender on top of it and a cuckoo clock with sausages attached to the back of it. On its side, there is a container of kelp soda connected to it. It was previously a 25¢ photo booth.

The time machine was built by SpongeBob and Plankton, using different items from the restaurant Taco Haüs in order to get the Krabby Patty secret formula from the past, to stop the apocalypse. It first goes four days into the future, which creates an alternate timeline by accident. In this timeline, they see the town had decayed into a desert wasteland and a bearded Patrick who is later revealed to be sitting on top of a buried Krusty Krab. Next, the time machine travels 10,000 years into the distant future of the galaxy, where SpongeBob and Plankton find Bubbles the dolphin in his inter-dimensional spacecraft.

After escaping Bubbles, the time machine goes to the right time and ends up at the Krusty Krab two days before the apocalypse, where SpongeBob and Plankton take the formula and go back to present time in the Krusty Krab to deliver the formula, only to find out he grabbed the wrong secret formula. 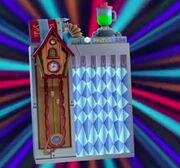 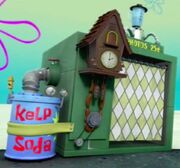 Add a photo to this gallery
Retrieved from "https://spongebob.fandom.com/wiki/Time_machine_(The_SpongeBob_Movie:_Sponge_Out_of_Water)?oldid=3092624"
Community content is available under CC-BY-SA unless otherwise noted.