View source
If you were looking for the article about the VHS, then see Tide and Seek (VHS).

Laugh Your Pants Off 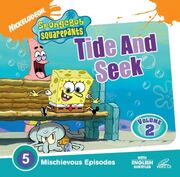 Slip showing it's episode list on the Australian release.