Encyclopedia SpongeBobia
Register
Don't have an account?
Sign In
Advertisement
in: Events, Sections in need of expansion, Atlantis SquarePantis,
and 5 more
English

Think Happy - The Year of the Sponge

View source
If you were looking for the article about the book, then see Think Happy!.

Think Happy - The Year of the Sponge, known as Happy Yellow in Japan, was a year-long campaign that was held internationally and similarly to The Ultimate SpongeBob SpongeBash, it was celebrating the 10th anniversary of SpongeBob SquarePants. A 24-hour marathon named Think Happy Day was commissioned by Nickelodeon North Europe as part of the campaign, and was broadcasted in a total of 22 Viacom networks in 9 countries.[1] Also, new season 6 episodes and the double-length specials "SpongeBob SquarePants vs. The Big One" and "What Ever Happened to SpongeBob?" debuted internationally.[2][3]

Commissions in the United Kingdom

The Sponge Who Could Fly musical

Main article: SpongeBob SquarePants: The Sponge Who Could Fly

The Sponge Who Could Fly is an international musical, based on the episode "The Sponge Who Could Fly." The script was written by Steven Banks, who had become the head writer for the series in Season 4, with songs by Eban Schletter. Gip Hoppe served as director, with choreographer and associate director Jenn Rapp, and the set was designed by Rialto vet David Gallo. The musical was produced by Nickelodeon and MTVN Kids and Family Group, partnered with Broadway Asia Entertainment.

SpongeBob SuperFan was a contest where people could vote about their favorite SpongeBob SquarePants fan. The five finalists were named Laura, Hannah, Courtney, Rhianna, and Lucy.

SpongeBob Superfan Finalist Puppet Show
A video submitted by Jenna, initially picked as one of the 5 finalists.

Bollywood Bob is a music video that was produced by Nickelodeon UK. It first aired on the said network on November 14, 2009[4] and was followed by showings of a 30-second version in Vue and Cineworld cinemas nationwide. It follows Rohan, who enters a Bollywood palace to present the King with a golden sponge.[4]

New season 6 episodes and the double-length specials "SpongeBob SquarePants vs. The Big One" and "What Ever Happened to SpongeBob?" debuted in the UK. Also, a contest was held for the latter, with prizes including Think Happy t-shirts.

On November 28, nine countries across North Europe like the Netherlands, Scandinavia, and Belgium would show from Viacom channels including Nickelodeon, Comedy Central, MTV, and TMF, a 24-hour SpongeBob marathon. In addition, the viewers would decide what to see during the SpongeBob Top 100, from the Nickelodeon website. During the marathon, statements of celebrities and kids, such as the cast of House of Anubis, would pass by, in which they are told what makes them happy.[1] Viewers could submit messages, or photos and videos, that "show their personal moments of happiness", so they can have a chance to appear.[5]

Viacom pay-TV stations in Germany were not affected by this special and showed their normal program that day.

MTV started the day at 6:00 am with the documentary "Square Roots: The Story of SpongeBob SquarePants." Afterwards, the SpongeBob episodes were broadcast. Focus at MTV was "beach and sea." Then the best "Underwater Hits" were shown in a clip section.

On Comedy Central Germany, there was a marathon called "Captain's Secrets", broadcasted as part of the Think Happy Day, on November 28, on 8:15 PM. Selected episodes from the marathon would have to do with rumors surrounding SpongeBob SquarePants and other main characters. The event was presented by the Captain.[1]

10.000 copies of a limited edition plush toys of SpongeBob, were produced with gold color, as part of the campaign by Simba.

Nickelodeon launched the second Think Happy Day marathon on May 22 at 6am. Until 20:15, an episode marathon of the "funniest" SpongeBob episodes would air on the screen. "With this special program, Nickelodeon celebrates the day of laughter and invites all fans of the yellow sponge to a great SpongeBob party with lots of great winnings!" In the countdown to Think Happy Day Online, there would be hands-on activities for fans.

SpongeBob fans would help shape the program on Think Happy Day this year, adding a laugh of laughter to the Day of Laughter. With the help of the SpongeBob app for Think Happy Day sponge fans could cut their own favorite scenes together and create an individual minute of laughter. The "funniest minutes" of laughter would air on May 22.

A special "SpongeBob SquarePants" programming marathon with 55 episodes between 6.00am and 8.15pm, plus a special showing of "The SpongeBob SquarePants Movie" at 2.00pm were broadcasted in Nickelodeon Germany, as part of the third annual "Think Happy Day", that would be held on May 27, 2012.[8] The slogan was "Be Spongy!".

Between May 27 and July 14, 2012, European Nickelodeon viewers and fans of the show could log in to the official Nickelodeon Germany website, Nick.de, to add their photos of themselves pulling "SpongeBob SquarePants" facial expressions, where each photograph would be added to a giant photo mosaic, featuring several thousand fans' photos. The finished "SpongeBob SquarePants" mosaic was then unveiled and displayed on a special street banner around Europe during Summer 2012.[9]

Commissions in other countries

Between July 10 and November 21, 2009, an exhibition in Pavillon de l'Eau happened in France, in partnership with Eau de Paris and the Paris City Council. After the end of it in the museum, it would tour around France.

Spongebob Rules Promo
A promo for the event on Nickelodeon UK

SPONGEBOB The Year Of The Sponge

Year of the Sponge - Nickelodeon

Promotional posters for the event in Japan 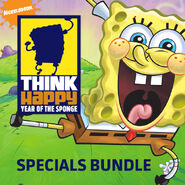 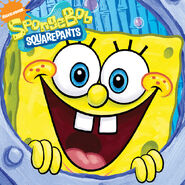 2009 promo for the campaign on Nickelodeon Europe