"Man Ray Returns"
"There's a Sponge in My Soup" is a SpongeBob SquarePants episode from Season 11. In this episode, Mr. Krabs’ new Krabby Soup is a hit – until some heat-loving hippies move into the soup vat.

The episode begins on a windy winter day in the Krusty Krab kitchen, where Mr. Krabs has brought SpongeBob some ingredients for the new Krabby Soup. The ingredients include a half-eaten Krabby Patty, two moldy pickles, and some smashed potatoes that look like Squidward. SpongeBob asks him if he got the ingredients from the garbage, but he claims that he intercepted them before they made it to the garbage. Mr. Krabs then starts listing everyone he wants to try the soup and SpongeBob asks about hippies, to which Mr. Krabs angrily repeats "hippies." SpongeBob informs him that there are hippies living out back by the hydrothermal vent. Mr. Krabs goes out to remove the hippies from his property, but they refuse to leave. He accidentally falls into the vent, and the hippies go inside the kitchen where it is warm. The hippies hop into the Krabby soup, while Mr. Krabs seals off the vent. When he returns to the kitchen, he and SpongeBob notice that the soup is just broth. He tells SpongeBob that he can add more ingredients. When SpongeBob throws in some ingredients, they keep getting eaten by the hippies and SpongeBob believes they are disappearing. He puts in an onion that they throw back out at him.

At the tables, the hippies keep popping out of the customers' soup. They return the soup to Squidward at the counter, who tries to throw them in the trash but is stopped by Mr. Krabs. Mr. Krabs then returns the soup to the pot, but is surprised to see the hippies slide in. He orders them to leave, but they refuse. Mr. Krabs tries to fish them out with long hair as bait, but is unsuccessful. He then tries to tempt them with a crochet foot-bag, but they end up kicking it into the pot with them. Mr. Krabs, SpongeBob, and Squidward then form a drum circle that leads the hippies out. However, their hands begin to cramp and they can no longer beat the drums. Mr. Krabs says "I wish we had another drummer," to which SpongeBob pulls out a toy monkey drummer. This causes the hippies to go back to the soup, claiming "Drum machines aren't cool."

Mr. Krabs sends SpongeBob into the soup to remove the hippies. After having a conversation with the hippies, they all begin to meditate and SpongeBob becomes a hippie himself. Mr. Krabs pulls SpongeBob out and realizes he has gone too deep, so he sends him back in. Upon entering the soup again, SpongeBob finds Patrick, who also appears to be a hippie. SpongeBob says everything is getting confusing and goes to have a Krabby Patty to calm himself down.

Back in the kitchen, SpongeBob realizes the Krusty Krab appears to be different. He exits the kitchen and finds Mr. Krabs meditating. Mr. Krabs tells him that he had to shut down the Krusty Krab since SpongeBob was not there to make the patties. This upsets SpongeBob, so they start dancing to cheer him up. SpongeBob asks him if they can reopen the Krusty Krab, to which Mr. Krabs replies "I thought you'd never ask." In order to get rid of the hippies, they remember that they need to be someplace warm. They send the hippies to Squidward's bathtub, which shocks him when he begins to take a bath. He ends the episode yelling "hippies!" 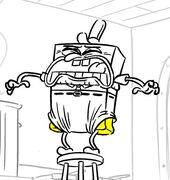 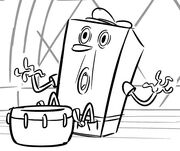 SpongeBob SquarePants - "There's a Sponge In My Soup" Promo

SpongeBob SquarePants - "There's a Sponge In My Soup" Promo 2

Retrieved from "https://spongebob.fandom.com/wiki/There%27s_a_Sponge_in_My_Soup?oldid=3514250"
Community content is available under CC-BY-SA unless otherwise noted.