"Mutiny on the Krusty"

"Mutiny on the Krusty"

"Whirly Brains"
"The Whole Tooth" is a SpongeBob SquarePants episode from Season 9. In this episode, Patrick has to lose his last baby tooth, but he is frightened.

In the beginning of the episode, SpongeBob and Patrick are having fun chewing on some saltwater taffy at Salmon Sal The Taffy Pal in the Bikini Bottom Fair. Patrick pulls some sweets in his mouth when suddenly, he begins to feel pain and assumes that it has something to do with his teeth. SpongeBob suggests that Patrick should go to the dentist. Although Patrick does not want to because he is afraid of the dentist, he reluctantly goes.

At the dentist's office, Dr. Mundane checks Patrick's teeth and finds that he still has a baby tooth. He tells Patrick that to make the pain stop, he needs to extract the tooth so the adult tooth can grow in its place. But Patrick refuses to let his tooth go. As they head home, SpongeBob tells Patrick about Tooth Island, a place where the Tooth Fairy sends baby teeth after being extracted from someone's mouth. Patrick still refuses to leave his baby tooth and claims that he knows what is best for it.

As time goes by, Patrick continues to suffer pain in his mouth and finally decides to get his tooth to the Tooth Fairy. Squidward, who does not believe in the Tooth Fairy, rants that there is no such thing. He bets that if SpongeBob and Patrick could prove that if there is a Tooth Fairy, he will eat a bucket of raw chum meat, which disgusts them. SpongeBob suggests to have Patrick's tooth removed, but Patrick does not want to and runs away. SpongeBob pursues Patrick in a chase and finally catches him. When SpongeBob shows him photos of how SpongeBob's teeth were handled, Patrick finally decides that it is time to have his tooth removed.

Dr. Mundane successfully extracts the tooth, and at night, Patrick puts his tooth under the pillow so he can go to Tooth Island. While Patrick is sleeping, SpongeBob sneaks in to take Patrick's tooth. However, he gets caught by Squidward, thinking that he proved the Tooth Fairy is not real. Patrick is disappointed and believes that SpongeBob has betrayed him. But SpongeBob does not believe that and takes Patrick and Squidward to the docks. There, he shows them the real Tooth Ferry, which turns out to be a cruise ship. Patrick is overjoyed, says good-bye to his tooth, and gets a dollar, which he tells SpongeBob to put under his pillow for tomorrow. After the ship departs, SpongeBob and Patrick punish Squidward for trying to ruin their friendship (and ranting that the ferry does not exist) and force him to eat a bucket of chum meat as he bet earlier, which results in him in losing his teeth, which swim to the Tooth Ferry, as the episode ends.

On June 14, 2016, nearly a month after it was confirmed, Vincent Waller posted an image from this episode on his Twitter account.[2] 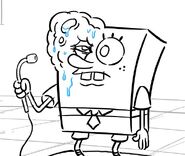 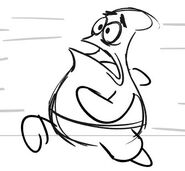