Both the original release and the 2014 re-release include a demo of the PC game, in order to access it, one needs to buy the DVD and put it on their computer, and then go to the DVD unit; they will see a program called "install." Click it, and after the installation is over, a screen of Nickelodeon will appear, asking them for gender and age clarification. After they verify, a screen showing SpongeBob and Patrick running with Neptune's crown will appear with two options: "Play Movie" and "Install Game." Click the Install Game option and wait a few minutes for the demo to load.

The demo is exactly the same as the original game, but if one completes the mission in which SpongeBob needs to brush his teeth, a screen which promotes the full version of the game will appear, and after that, the game will close itself. 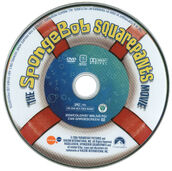 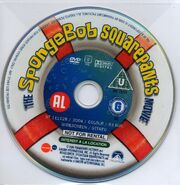 Scene Selection (13-14)
Add a photo to this gallery

Retrieved from "https://spongebob.fandom.com/wiki/The_SpongeBob_SquarePants_Movie_(DVD)?oldid=3475290"
Community content is available under CC-BY-SA unless otherwise noted.