The Play's the Thing

"Rodeo Daze"
"The Play's the Thing" is a SpongeBob SquarePants episode from season 7. In this episode, Squidward does a play at the Krusty Krab.

Norton the mailfish goes to the Krusty Krab with a letter for Squidward, who is not at his post. SpongeBob sees this and inflates some balloons, shapes them into Squidward's form, and stands at the cash register, impersonating his co-worker. Squidward's nose blows up and the mailfish reluctantly gives the balloon Squidward the letter. He then runs out of the restaurant, screaming.

The balloons pop, waking up Squidward, who was asleep under the register. When he sees the letter, he becomes jubilant and SpongeBob joins the cheer. Mr. Krabs comes out and asks what's Squidward so happy about. Squidward tells him his script was accepted and that he quits. He walks to the front door, reading his letter. However, when he learns his script was not accepted, he turns around and returns to his post. SpongeBob gives him the idea to perform the play at the Krusty Krab. Mr. Krabs refuses to allow it at first, but when SpongeBob says he can charge customers double for the show, Mr. Krabs goes for it, but with one warning: if so much as one Krabby Patty is late, he'll shut Squidward down. SpongeBob suggests the event be called "Singy Eaty Time," even though Squidward says that there is no singing involved. Despite this, Mr. Krabs loves it.

The Krusty Krab holds auditions for parts and a long line of anchovies await their role. When they learn they won't be paid, they make a hasty retreat. All that's left is SpongeBob, whom Squidward dejectedly says has all the other parts.

That night, some people go to the Krusty Krab for Squidward's play. When the curtains rise, the cashier's post is replaced with a cardboard version and Squidward recites his lines. A fish comes along and asks for a Krabby Patty. Squidward shoos him away, but Mr. Krabs pops out from the window and reminds Squidward of his warning. Squidward delivers the order to the table, reciting lines which criticize the customers and the food. Squidward returns to the stage when a customer wants a refill. Squidward shouts at him, but Mr. Krabs orders him to fulfill the customer's request. Squidward walks over with a bucket of soda and splashes it on the customer. When Squidward returns to the stage, a customer wants ketchup on his patty, and Squidward squirts him with the condiment. Mr. Krabs again reminds Squidward of his warning, to which Squidward calls Mr. Krabs his "skinflint boss." Mr. Krabs is about to get angry, but Squidward tells him it's part of the play. 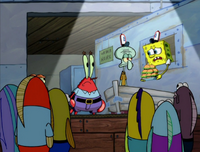 Squidward refers to the worst part of his job, SpongeBob. The stage rotates, so the audience can see the side of the kitchen with SpongeBob, who thinks he's forgotten the lines. Squidward tells him to act like himself, so he acts like a garbage truck, flinging a bag of garbage at Squidward. Two fish try to get their orders, but Squidward ignores them, reciting his lines. The customers finally lose their patience and angrily demand Krabby Patties. Mr. Krabs tells Squidward that they haven't gotten their orders, and Squidward asks SpongeBob (still acting like a garbage truck) where the patty is. SpongeBob goes back to normal but sees the patties are now burnt. He apologizes for ruining the food, but Squidward serves the burnt patties to the customers, despite SpongeBob's warnings that they're not fit for consumption.

The customers are not happy with the quality of their meals, and Squidward tells them they wouldn't know quality "if it hit them in the head," to which a customer hurls his patty at him. The rest of the customers are eager to join in, but SpongeBob encourages them to respect the Krabby Patty. He has won them over, but Patrick ruins the tender moment when a food fight breaks out after he said that he liked throwing food. Mr. Krabs sells customers things to throw at his employees.