View source
If you were looking for the article about the in-universe variety show, then see The Patrick Show!.

The Patrick Star Show is a SpongeBob SquarePants spin-off series that focuses on Patrick.[5] It was created by Luke Brookshier, Marc Ceccarelli, Andrew Goodman, Kaz, Doug Lawrence, and Vincent Waller.

The series features Patrick Star hosting his own late-night talk show, mainly including him and his family, but other SpongeBob characters still make occasional appearances. It also introduces several new characters.[6][7]

Voice-overs for the project started in August of 2020.[5][8] It was expected to receive 13 episodes[5] with mostly the same time structures as the main series[9] and comes from the same crew as the current staff of the main series.

The series centers around Patrick as he hosts his own talk show from his family home. His sister, Squidina, helps him run the show and is far more competent than him. His parents and grandfather are too clueless to help out most of the time, but their shenanigans often end up impacting Patrick's show.

The spin-off's main characters are the members of the Star family: Patrick, his sister Squidina, his parents Bunny and Cecil, and his grandfather GrandPat.

Ouchie and Tinkle, two pets belonging to the Star family, appear as recurring characters. The incidental characters are the same as the main series, with no adjustments to their designs. The only change is that the characters are younger.

Various characters from SpongeBob SquarePants make cameo appearances, such as all of the main characters. This spin-off is notably the first entry in the franchise where SpongeBob does not appear in every episode. 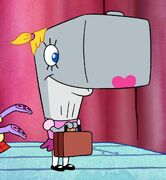 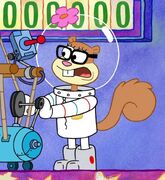 Promotional art of the Star Family. 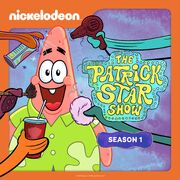 Bill Fagerbakke, the voice actor of Patrick Star, inside of the promotional truck

Concept art made by Bob Camp.

The Patrick Star Show - Coming this half term (NickToons UK)