View source
If you were looking for the article about the character, then see Mr. Paper.

"Arrgh!"
"The Paper" is a SpongeBob SquarePants episode from season 1. In this episode, SpongeBob plays with a bubble gum wrapper, and Squidward wants it after seeing how much fun it is.

As the episode begins, Squidward comes outside to start his relaxing day. He begins it by chewing bubble gum while laying in his lawn chair, and tosses the wrapper into SpongeBob's front yard. SpongeBob comes outside of his house as well, only to realize that Squidward has dropped his wrapper on SpongeBob's yard. As Squidward is about to leave at the sight of SpongeBob, the latter catches him on time to ask if he wants it back. Squidward thinks it is only garbage, but SpongeBob states that in the right hands, it can be a goldmine of entertainment. Squidward does not believe SpongeBob and walks inside his house. SpongeBob asks him again if he wants it back, but he still refuses to keep it and tells SpongeBob he can have it.

With a sigh of relief, Squidward answers his ringing phone. When he answers it, it is actually SpongeBob asking if he is sure. Squidward angrily says that he is and that SpongeBob can keep it forever. Squidward hangs up the phone by slamming it, and starts panting from exhaustion. SpongeBob pops up from under the table the phone was on and asks Squidward if he is really sure. Squidward tells him to get out of his house and finally pushes him out. SpongeBob says it is his last time to change his mind, and Squidward tells SpongeBob one last time that he can keep it no matter how much he begs, pleads, or cries to have it back. After Squidward is out of SpongeBob's sight, SpongeBob says to the paper that he is lucky to have a friend like Squidward.

Squidward gets very angry and opens his window again to see SpongeBob frolicking with the paper and showing Gary what fun things he can do with it. He pretends he is SuperSponge and uses the paper as his cape. Then he pretends to be SpongeBob JunglePants and swings on vines while he does a Tarzan yell with the paper covering his crotch area. He lands on his house, starts grunting, and says he will call his animal friends by making different animal noises. Gary meows and SpongeBob says that Gary is right and that he is not a jungle boy. Afterwards, SpongeBob jumps off of the roof of his house, saying that he is a box of army supplies, and uses the paper as a parachute. Next, he pretends to be a bull fighter with the paper being the blanket and having Gary as the bull.

SpongeBob then does impressions. He does a guy with a mustache, a pirate with an eye patch, and a regular guy with an eye patch. He then starts to suck the paper in through his holes and blow it back out repeatedly. Squidward wonders how he does this and SpongeBob is shown making origami by swishing the paper around in his mouth. He makes a bird, a snowflake, and paper dolls. Squidward says that the paper does look like fun, but then covers his mouth, asking himself what he is saying. He storms back inside and says that the paper is not fun, but reading Boring Science digest is, and starts to read it. He is interrupted by SpongeBob laughing again. Squidward, while taking a bath, talking about how it is fun, but the paper then comes around the tub as an airplane with SpongeBob making the engine and gun noises. Then, Squidward is painting fruit and thinks that nothing is more fun than painting fruit. Squidward paints vigorously until he realizes he just painted himself playing with the paper and destroys the painting in rage. Squidward says to himself that he will prove to SpongeBob that the paper is not fun.

Squidward demands SpongeBob to give him back his paper, but SpongeBob reminds Squidward that he told him to never give it back to him, no matter how much he begs, pleads, or cries. Squidward suggests that he could trade for something and offers a rubber band. SpongeBob almost trades, but says that Squidward is just testing him and that he will never give the paper to him. He then trades every possession he has, even his house, for the paper. SpongeBob still tries to keep his promise, until Squidward offers his shirt. He accepts the trade and gives Squidward the paper. Squidward is happy at first, but when he starts to try to do the other things that SpongeBob was doing with it, he has no fun whatsoever with it. Squidward realizes that the paper was not fun, SpongeBob just made it look fun because of how creative and optimistic he is. And since Squidward, who only wanted the paper to be better than SpongeBob, is not creative or optimistic, he cannot do all the things with the paper that SpongeBob could.

The episode ends with Squidward lamenting that he gave away all his possessions for a useless piece of paper. Patrick, who is casually walking by, takes the paper from Squidward and uses it as a disposable wrapper for his gum, leaving Squidward with nothing as he asks for sunscreen. 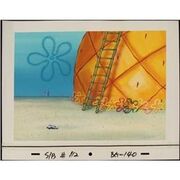 Art for a deleted scene.[2] 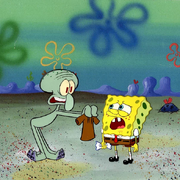