View source
If you were looking for the article about the food, then see Night Patty.

"Bubbletown"
"The Night Patty" is a SpongeBob SquarePants episode from season 11. In this episode, SpongeBob helps out the Krusty Krab's night shift crew, but the customers crave something creepier than usual.

Note: There is an asterisk (*) icon for all of these characters, except SpongeBob, Mr. Krabs and French Narrator, because they are all illusions created by The Tidal Zone.

The episode begins with SpongeBob and Patrick worn-out and hungry after being at Glove World! for so long, so they go to the Krusty Krab. It turns out the restaurant is in its night shift, and the customers as well as the workers are different from the usual ones. The two go to the cashier, Squidabeth, for Krabby Patties, but since they don't serve that during the night shift, they order the Great Pacific garbage patch.

SpongeBob wants to thank the cook for making the great meal he ordered, so he goes into the kitchen to do so. However, since he shook the cook's hands so hard, they get hurt and a backup cook is needed as Barry the Blobfish, the cook, is unable to do so. After Nosferatu checks SpongeBob to see if he can take over Barry's job, SpongeBob starts making Krabby Patties. However, the customers who come during the night shift dislike them.

While SpongeBob is trying to find something he thinks the customers will like, the Krabby Patties that were already getting cooked burn and the smoke that came out of them form into the shape of a Krabby Patty. The night shift customers enjoy these and all praise SpongeBob. Afterwards, the fisherman comes to the restaurant to rob their money. SpongeBob stops him from doing so by fighting with him and putting him inside the deep fryer, but it turns out the fisherman was robbing the place because it was their tradition.

SpongeBob apologizes to the fisherman, and the fisherman apologizes back. The fisherman decides to order many night patties, and right after, it's time for the night shift to end. Everyone except for SpongeBob leaves, and Mr. Krabs comes inside, wondering why SpongeBob is at work so early. The episode ends by revealing that SpongeBob had worked a shift in The Tidal Zone, and everything he saw during this time period was just an illusion. 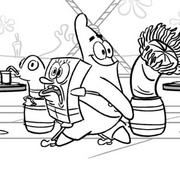 The Tidal Zone in The Night Patty