The Legend of Boo-Kini Bottom

View source
This is the page about the episode. For other uses, see The Legend of Boo-Kini Bottom (disambiguation).

"No Pictures Please"
"The Legend of Boo-Kini Bottom" is a SpongeBob SquarePants episode from season 11. In this episode, the Flying Dutchman wants to make sure SpongeBob and his friends are scared on Halloween.

The episode starts off with SpongeBob putting sparkly decorations on his house for Halloween. Patrick comes by in his knight costume, but he is not amused by SpongeBob's house because it is "too cute for Halloween." SpongeBob shows him his daisy costume, but Patrick is still not impressed because it is not scary enough. Patrick shows SpongeBob what scary is when Squidward's house scared the trick-or-treaters with onions. SpongeBob admits that he loves to go trick-or-treating, but he is too afraid to go out on Halloween. Patrick tells SpongeBob that there is no need to be afraid as long as he believes in one simple statement: Scary equals funny. SpongeBob agrees and goes with him.

The first place they stop at is Sandy's treedome. Sandy appears in her mad scientist outfit and is dubbed under the name: Dr. Franken-Cheeks. She, SpongeBob, and Patrick play a guessing game with her jars of horror and she shows them her latest invention: the acorn monster. Afterwards, SpongeBob and Patrick stop over at the Krusty Krab, where Mr. Krabs and Squidward are doing a haunted tour of the Chum Bucket. SpongeBob enjoys the haunted tour and laughs himself out. Mr. Krabs asks why SpongeBob is laughing, but SpongeBob tells him that he has a new theory: Scary equals funny. SpongeBob's theory does not intrigue both Mr. Krabs and Squidward and claim it as a major insult on Halloween. SpongeBob and Patrick stop over at the Chum Bucket, where Plankton and Karen are doing the haunted tour of the Krusty Krab. But SpongeBob finds this funny as well, which deeply annoys Plankton and Karen.

Meanwhile, in the skies above Bikini Bottom, the Flying Dutchman is enjoying himself on Halloween. However, he is halted by SpongeBob's laughter. He descends downward and goes to ask SpongeBob why is he laughing on Halloween. SpongeBob says that he used to be scared until Patrick told him that scary equals funny. The Flying Dutchman is offended by that statement at first, but when he looks at the Krusty Krab decorations, he concludes that they are as laughable SpongeBob claims they are. He decides to offer them a thrill ride inside his pirate ship, which SpongeBob and Patrick agree.

SpongeBob and Patrick ride inside the ship, where it is filled with ghosts, ghouls, skeletons, and monsters. Patrick is terrified, but SpongeBob still thinks it is funny. The Flying Dutchman begins to get annoyed with SpongeBob's laughter, but he soon gets another idea. Upon hearing that SpongeBob has other friends, the Flying Dutchman unleashes a ghostly mist that separates the souls of Sandy, Mr. Krabs, Squidward, Gary, and Plankton from their bodies. SpongeBob and Patrick are still riding in the ship and they encounter the souls of their friends locked in cages as they call for help. SpongeBob still finds this funny as he initially does not think it is really them, until he notices Patrick's soul caged up as well. Patrick confesses that he had been wrong all along and admits that sometimes scary equals scary. After hearing that, and seeing Patrick's soulless body, SpongeBob finally realizes the damage embracing Patrick's theory has done and runs out of the ship in fear. But, despite his fear, he decides to go back and rescue his friends.

Back on the ship, the Flying Dutchman tortures the souls of SpongeBob's friends. Plankton manages to set himself free and offers the Flying Dutchman a deal: Plankton takes over the world and they will split it 70-30. The Dutchman, however, ignores the offer and instead turns Plankton into his ghoulish servant. Just as the Dutchman prepares to roast the souls of SpongeBob's friends over a pit of demonic blue flames, SpongeBob appears in Sandy's acorn monster puppet. He goes to attack the Dutchman, but he ends up flying into a wall, destroying the puppet in the process. The Dutchman laughs at SpongeBob, as he believes that he is too stupid to scare someone like him. Plankton mentions the scary things SpongeBob has inside his brain, which infuriates the Dutchman to the point of stepping on him. However, he is encouraged to fly inside his brain and have a look.

Inside SpongeBob's brain, the Flying Dutchman encounters various creatures flying around and they carry him everywhere. All the dream creatures succeed in doing is unnerving the Dutchman, and he concludes that SpongeBob does not have any scary thoughts in his brain. But SpongeBob, who regains consciousness, says that what always scared him is when his mother takes out his naked baby pictures. At that moment, a giant naked baby version of SpongeBob appears and hugs the Flying Dutchman. The other dream creatures approach him as well and the Dutchman becomes scared. He flies out of SpongeBob's head and runs away, frightened. As his ship disappears, the souls of SpongeBob's friends return to their bodies. SpongeBob and Patrick agree that they learned to never use shortcuts, such as Patrick's "Scary equals Funny" theory, to face their fears again, and everyone runs into the Krusty Krab for the party. Meanwhile, Plankton gets picked up by a trick-or-treater and eats him, mistaking him for a piece of candy, as the episode ends.

Sally Cruikshank has made a short sequence for this episode.[4] 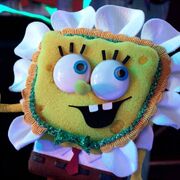 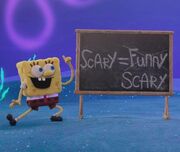 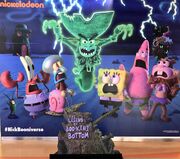 The Dutchman at the helm

Behind the Scenes Boo-Kini Bottom

Behind the scenes in boo-kini bottom

Behind the scenes that screen novelties

Behind the scenes at Screen novelties

Behind the scenes of boo-Kini bottom at screen novelties studio

Behind the scenes at screen novelties studios

Behind the scenes at Screen Novelties Studios - 1

Behind the scenes at Screen Novelties Studios - 2

Behind the scenes at Screen Novelties Studios - 3

Behind the scenes of SpongeBob SquarePants’ stop-motion Halloween special

Tom Kenny on SpongeBob The Legend of Boo-kini Bottom