"The Ballad of Filthy Muck"

"Pineapple RV"
"The Krusty Slammer" is a SpongeBob SquarePants episode from season 12. In this episode, Mr. Krabs turns the Krusty Krab into a jailhouse after Plankton breaks the law, but crime only pays for so long.

In the beginning of the episode, Plankton vandalizes the Krusty Krab to make Mr. Krabs look like a jerk, but he soon gets arrested and sent to prison. An officer takes Plankton to the police station with Mr. Krabs tagging along. The officer realizes the station is full and lets go of Plankton, wishing there was another prison. Mr. Krabs says he will turn his restaurant into a prison, and rolls a bowling ball with Plankton on it into the Krusty Krab to start holding a prison.

Plankton, trying to get out of prison, tricks Mr. Krabs and tries to escape, but ends up failing. Mr. Krabs puts Plankton in SpongeBob's hole as a punishment for doing this, and at the same time, the same officer comes back to send more prisoners to the Krusty Krab. After that, the Krusty Krab starts having cells within the restaurant to hold all the prisoners. Mr. Krabs then lets Plankton get out of the hole, only to punish him again by putting him inside the secret formula bottle with the formula itself outside of it.

SpongeBob sends mail to all the prisoners, while Mr. Krabs continues to severely punish Plankton. The officer comes back again to tell Mr. Krabs that Plankton has served his punishment and is getting released. As he is walking out, Plankton tells Mr. Krabs that he hopes what he is doing is worth paying for. It turns out the prisoners are enjoying many luxuries due to SpongeBob taking care of them. Mr. Krabs gets angry and takes away all these luxuries from the prisoners. They get mad and start throwing tomatoes at Mr. Krabs, causing the regular customers at the restaurant to leave. This makes Mr. Krabs angry enough to release all the prisoners so he does not have to deal with them anymore.

Later that night, all the prisoners come to SpongeBob to tell him they miss being at the prison because of him. SpongeBob creates a plan to get them all back in the prison, and the next day, Mr. Krabs sees all the prisoners in his restaurant again. This makes Mr. Krabs mad because he just released them the other night, but SpongeBob tries to tell him that he should not say that, as the officer is eating at the restaurant right at that time and tells him releasing prisoners early is a crime. She then arrests Mr. Krabs for admitting his act, as he realizes his error until telling SpongeBob to set a massage appointment for him. The officer says the Krusty Krab is full, so she sends Mr. Krabs to another jail as he realizes where it is: the Chum Bucket. There, Mr. Krabs is placed in a cage, while a vengeful Plankton takes full advantage of this and happily feeds buckets of chum to the crying Krabs, as the episode ends. 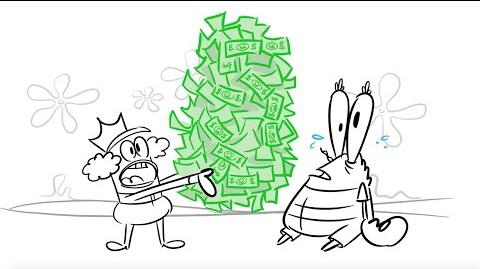