"The Gift of Gum" is a SpongeBob SquarePants episode from season four. In this episode, Patrick gives SpongeBob a glob of gum for Best Friends Day.

On "Best Friends Day," Patrick gives SpongeBob an enormous wad of used gum he has amassed over his entire lifetime called "Gummy," and SpongeBob finds it a better gift than the one he is giving Patrick: a robotic butler. However, when he takes it inside, he realizes how disgusting it is with its used and unwashed contents, and it even starts to scare him, with a pair of underpants crawling out of the gum and talking. First, SpongeBob tries to throw it away, but Patrick catches him in doing so, and he says that he was dressing it up with the garbage can. Later, SpongeBob tries to bury Gummy, but Patrick catches him again, and he says that he dug the hole to be able to look at Gummy from below. Patrick insists that it must be displayed properly, and places it above SpongeBob's doorway. SpongeBob next tries to dispose of it in the night, and in the process frees several fish who were trapped inside it. He tries to pull Gummy off of his house, and fails, destroying the ball and getting stuck to it in the process. 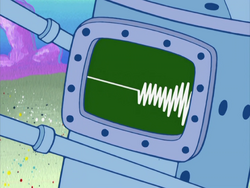 The next day, Sandy visits SpongeBob's house to see it covered in the sticky remains of Gummy, with SpongeBob hanging above his doorway. She tries to free him by lassoing a piece of Gummy onto a passing truck, which is almost able to pull it away but is ultimately pulled in by it, hitting SpongeBob's house and causing the gum to explode, completely covering the houses of SpongeBob, Squidward, and Patrick, and trapping Squidward and Sandy as well. Patrick then appears, and SpongeBob tells him he can have Gummy back. Patrick then wolfs down all of the gum, making him super-morbidly obese, but also freeing SpongeBob, his friends, and their houses. However, he then hiccups a massive bubble, which explodes and covers the whole town in gum. As the episode ends, Patrick yells that this is the best Best Friends Day ever.

Retrieved from "https://spongebob.fandom.com/wiki/The_Gift_of_Gum?oldid=2912406"
Community content is available under CC-BY-SA unless otherwise noted.