"Lost and Found"
"The Getaway" is a SpongeBob SquarePants episode from season 10. In this episode, when SpongeBob mistakes an escaped convict for his driving instructor, it's the new teacher who learns a lesson.

SpongeBob is having a boating lesson with Mrs. Puff, and while he is driving, he arrives at the cemetery. He accidentally crashes into a recently dug grave, and then Mrs. Puff wishes she didn't have to teach him. SpongeBob then reverses his way towards the Bikini Bottom Jail. Mrs. Puff quickly gets off the boat and says that she doesn't care who teaches him, as long as she doesn't have to teach him. Mrs. Puff then goes to the phone box to phone another driving instructor.

Back at Mrs. Puff's boat, Sticky Fins notices the police are chasing them, then tells SpongeBob to drive crazily. SpongeBob does this, smashing into building by building. SpongeBob then smashes into the balcony of a fancy restaurant. Taking advantage of the fancy restaurant, Sticky Fins steals all of the expensive belongings of other people, and then soon escapes to the streets. Stinkyfins immediately tells SpongeBob to turn around and drive on the correct direction to avoid being noticed in the large crowd of drivers.

Later, Dorsal Dan notices the mess, and tells Mrs. Puff that SpongeBob and Sticky Fins escaped. He then introduces himself to Mrs. Puff. Then Mrs. Puff starts to like how he talks and behaves, feeling romance.

SpongeBob then drives to the boat wash to wash the boat. Sticky Fins is angry with what SpongeBob is doing with the boat. Later, Mrs. Puff feels more romance towards Dorsal Dan. Soon, a passing truck blows away the bubbles and reveals that SpongeBob is driving with an escaped convict. SpongeBob drives faster and then crashes into a golf course called "Driving Range." Soon, everyone is golfing golf balls onto Sticky Fins. They then quickly drive away. Sticky Fins then cries about what has happened.

Soon, the police are chasing Sticky Fins again. Mrs. Puff and Dorsal Dan notice Sticky Fins and SpongeBob. Sticky Fins is begging for help, while SpongeBob tells Mrs. Puff that the "new driving instructor" is helping him to drive in a very new way. Mrs. Puff advises him to keep eyes on the road at all times. Hearing this, SpongeBob literally does this, dropping his eyes onto the road, instead of watching the road. Dorsal Dan near-misses a fall from the cliff by swiftly turning. SpongeBob doesn't turn, so falls down the cliff. The police also chase them down the cliff. Sticky Fins struggles to escape the boat, but then the boat crashes onto the Bikini Bottom Jail. Sticky Fins then admits he doesn't want to leave jail, and begs the lawyer and prison guards not to leave prison, then quickly runs towards a solitary cell.

Later, Dorsal Dan is found by the police and then taken into the same solitary cell as Sticky Fins has. Mrs. Puff begs them not to take him away. Later, police cars fall onto the Bikini Bottom Jail grounds. The police officers are all safe, advising the audience, "Drive safely, and always wear your seat belt!"

The episode name was confirmed in a tweet by Vincent Waller on November 7, 2016.[3] 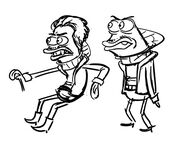