"Married to Money"
"The Fish Bowl" is a SpongeBob SquarePants episode from season 9. In this episode, when Sandy tries to study SpongeBob and Patrick's behavioral patterns, her science experiment goes awry.

The episode starts off with Sandy sitting in her pool lounge chair listening to music, when suddenly, a book she ordered arrives at her dome. The book is about behavioral psychology, which Sandy uses to observe the behavior of fishes underwater. She begins off by riding a bus full of fish, who seem to act naturally. However, she disturbs and annoys the Bikini Bottomites by eavesdropping and reading her observations out loud. The fish throw her and her equipment out of the bus and she decides to find someone who will not mind being observed. She then sees SpongeBob and Patrick playing with each other, and decides to ask them. The two do not know what they are supposed to do during natural observance and just stand straight while saying actions and forms of the word "natural." They are also very nervous due to the microphone and recorder; their nervousness immediately goes away when Sandy ends her experiment. Despite her experiment being unsuccessful, she gives them both an A+ for their effort, and when they start cheering, she observes them again, only to provoke the same reaction. She proceeds to give up.

Reading from the book again, Sandy learns that the test subject will behave abnormally if they are aware that they are being watched and may cause inaccurate results, so she decides to watch them in secret. She starts off by assigning them to go to the beach, to fill one bucket with white sand and one bucket with black sand to count. She also puts Patrick in charge. After that, Sandy hides microphones and cameras everywhere, puts Gary in charge of spying on the two, and observes the cameras from a van disguised as an ice cream truck.

When SpongeBob and Patrick get back home, Patrick is unable to stop thinking about being in charge. SpongeBob asks which method they will use to count the sand, but Patrick does not pay attention and continues to think about the phrase "I'm in charge." After SpongeBob asks how he wants to count the sand, he simply says that first suggestion, which is both of them counting the white sand first and then the black sand. While counting the sand, Patrick continues to think about being in charge and imagines himself running an organization called "Patrick Corp." When SpongeBob snaps him back into reality, having been stuck at 47 grains, Patrick decides he does not like how they are doing it and has SpongeBob count the black sand while he counts the white sand. He has trouble counting the sand, but SpongeBob does it flawlessly. Patrick then makes the error of missing the digit in the tens place as SpongeBob has the same digit in the ones place as him, causing him to get frustrated with SpongeBob.

Sandy then starts her second experiment by putting two scoops of the same amount of ice cream into two different sized bowls to confuse Patrick, which she gives to the two disguised as a mustached ice cream man. Squidward tries to get the ice cream, but when he comes, Sandy says the ice cream is sold out and slams the window on his nose, leaving him annoyed. Patrick likes the bigger bowl but believes the ice cream in the other bowl is bigger, and SpongeBob and Patrick constantly trade before Patrick says the only way for it to be fair is for him to eat both, causing SpongeBob to protest before Patrick selfishly reminds him that he is in charge.

Sandy then begins observing them both in her third experiment, when she hands them two ice cream cones exactly the same size. Squidward again tries to get the ice cream, but she says that they are sold out again and slams the window on his leg. Patrick takes both cones and SpongeBob begs to have his but Patrick forces him to rub his feet and then count the sand while his ice cream melts. SpongeBob then counts the black sand after finishing with the white sand, but Patrick cruelly knocks over the bucket and mixes it all together, forcing him to start over. Angry, SpongeBob gives Patrick's ice cream "sprinkles" by covering it with white sand, only for Patrick to retaliate by dropping his ice cream in the sand and eating SpongeBob's melted ice cream whole, finally causing SpongeBob's patience to run out.

Sandy then realizes Patrick is taking advantage of his privileges and taking advantage of SpongeBob due to his power of being in charge. SpongeBob angrily fights back, with Gary telling Sandy that the situation is bad. She runs towards the door and asks them to open it, but they have a fight about who opens it for her and she is forced to break the door down. Still wearing the mustache, Patrick believes that she is a real ice cream lady, and asks her to tell SpongeBob to open the door. She then reveals herself to Patrick, shocking him. Sandy reveals her experiment towards SpongeBob and Patrick. She shows them the cameras and microphones which leads to their affected behavior again, with SpongeBob upset that Gary was in on it too.

Upon hearing this, Patrick realizes that he got carried away with being in charge and apologizes to SpongeBob for his selfish behavior with him saying that he deserved a C-. SpongeBob tells him not to be so hard on himself as it was the experiment's fault, causing Patrick to blame science. Sandy tells them that they all get an A+ and ice cream. Squidward starts begging for a drop of the ice cream which Sandy, SpongeBob, Patrick, and Gary all ate, and they end up observing Squidward's desire for the ice cream in the house, now revealed to be a cage, as the episode ends.

Vincent Waller confirmed this episode on Twitter on February 25, 2016.[2] 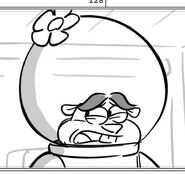 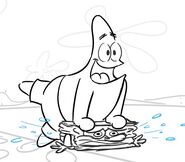