View source
If you were looking for the article about the season, then see Season 12.

January 12, 2021
The Complete Twelfth Season is a SpongeBob SquarePants DVD box set that was released on January 12, 2021. It contains all episodes from season 12, except for "Kwarantined Krab."

"Everyone's favorite Bikini Bottom buddies bubble up in the Complete Twelfth Season of SpongeBob SquarePants! See what happens when SpongeBob and Patrick work on Old Man Jenkins's farm for a day! Don't miss Sandy narrating Gary's nocturnal adventures (and discover the identity of his secret pal). Then Patrick learns something totally new about his own home sweet rock. Plus - why did Patrick get a new job? (For free ice cream. Duh!) And prepare yourself as SpongeBob explores the dreams of his sleeping neighbors. All this and MORE nautical nonsense await within!" 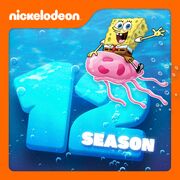 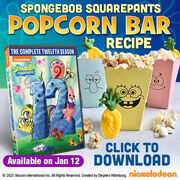