View source
If you were looking for the article about season, then see Season 10.

October 7, 2020
The Complete Tenth Season is a SpongeBob SquarePants DVD box set that was released on October 15, 2019. It contains all 22 episodes from season 10.

"Check out the grand opening of SpongeBob's Place, say farewell to the Chum Bucket and grab some free ice cream with Patrick! Then, stick around for more tales of the deep: SpongeBob is allergic to his pineapple home, a strange moon turns everyone in town into wild animals, and Plankton and Karen lose their love connection!" 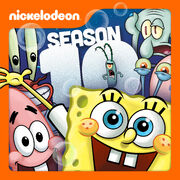