View source
If you were looking for the article about the season, then see Season 9.

October 7, 2020
The Complete Ninth Season is a SpongeBob SquarePants DVD box set that was released on October 10, 2017. It contains all 49 episodes from season 9.

Dive into over 20 tales and three double-length episodes, including the latest food craze to sweep Bikini Bottom, SpongeBob's search for a new job, and a mysterious goo bubble battle! Plus, soak up five bonus Krabby Patty Shorts! 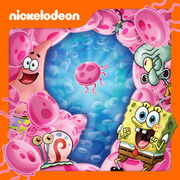