View source
If you were looking for the article about the season, then see Season 4.

July 3, 2014
The Complete Fourth Season is a SpongeBob SquarePants DVD box set that was released on November 13, 2012 and contains all 38 episodes from season 4.

Dive into SpongeBob hilarity with this collection of some of the most comical episodes ever to make land, like when SpongeBob attends a party with Mr. Krabs' Navy buddies - as Mr. Krabs!... SpongeBob and Patrick make a movie... SpongeBob goes on a quest to become King of Karate... Patrick becomes Patricia... and more! 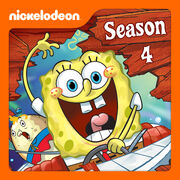